The Geographical Distribution of the family Charadriidae, or the Plovers, Sandpipers, Snipes, and their Allies 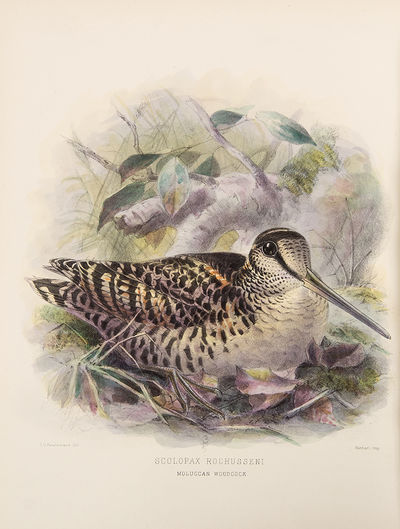 First edition, first issue, of this classic monograph of the shore birds of the world: the plovers, sandpipers and snipe.

The fine plates includes images of birds from Africa, South America, New Zealand and Madagascar. They are the work of John Gerrard Keulemans (1842-1912): "the major bird book illustrator for 30 years at the end of the 19th century" (C. Jackson, Dictionary of Bird Artists of the World p.314). The plates are ably supported by a large selection of wood-engraved illustrations - the majority with details of plumage or of individual species by Lodge and Millais. As Seebohm explains in the preface, the main impetus for the work came from the collection and initial research of James Edmund Harting, with subsequent information coming from the collections of Swinhoe and Shelley, as well as the author's own researches. He also made use of the national collections in the British Museum, Salvin and Godman's collection of South American birds and the Smithsonian's collection of birds from the Pacific Islands. Zimmer notes that "The prefatory matter.. is devoted to general remarks on classification, evolution, differentiation of species, glacial epochs, migration, zoological regions and subspecific forms. The main body of the text discusses the various species of shore birds in order, with considerable detail..." He sums up the work as "a valuable repository of information on the subject" with "excellent" hand-coloured plates. The two issues of this work are most readily determined by the frontispieces: the Chilean dotterel features in the second issue, replacing the slender-billed dotterel found in the first issue (as here). The first issue is said to have superior coloring.