THYRA: A ROMANCE OF THE POLAR PIT .. 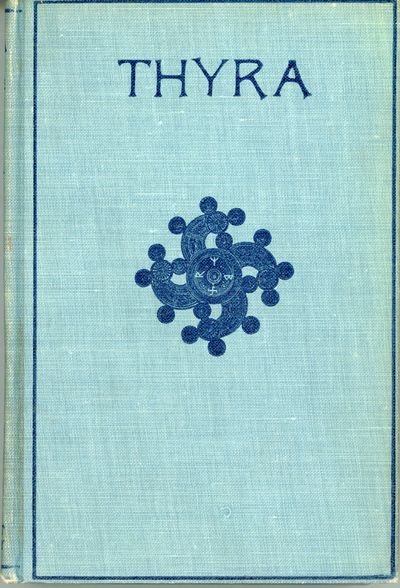 by Bennet, Robert Ames
New York: Henry Holt and Company, 1901. Octavo, pp. [1-6] 1-258, fly leaves at front and rear, original decorated blue cloth, front and spine panels stamped in black. First edition. This issue without the seven inserted plates found in some copies is generally thought to be part of a remainder issue. However, it is more likely that these copies are part of a second or later printing of the book as pagination and make up of the signatures differ from those of the first printing. These later copies never had the inserted illustrations by Blumenschein or the leaf with "list of illustrations" (pages 7-8 of the preliminaries in the first printing). There are other variations, including no advertising leaves following page 258. A well-known lost race novel, regarded by many to be a minor classic of the genre. A quartet of explorers in a hot-air balloon drift and crash in an unexplored part of the Arctic, where they find, in a sort of hollow earth, a Norse colony, a pit with fantastic creatures, a ghoulish system of human sacrifice, and adventures aplenty. The story also involves what one could call a lost-race-within-a-lost-race. An excellent recreation of the Nordic zeitgeist. "Bennet's description of an expedition's thrust northward from Franz Joseph Land in 1896 provided one of the most realistic passages in the genre ... THYRA pictured the full horror of Arctic exploration." - Clareson, The Emergence of American Science Fiction: 1880-1915, pp. 146-47. "One of the better early lost-race novels." - Bleiler, Science-Fiction: The Early Years 171. "A masterpiece of fantasy fiction of the lost race type ... as thrilling reading today as it must have been to our grandparents." - Stuart Teitler. Angenot and Khouri, "An International Bibliography of Prehistoric Fiction," SFS, VIII (March 1981), 41. Clareson, Science Fiction in America, 1870s-1930s 062. Howgego, Encyclopedia of Exploration: Invented and Apocryphal Narratives of Travel B23a. Locke, A Spectrum of Fantasy, p. 31. Sargent, British and American Utopian Literature, 1516-1985, p. 124. Teitler and Locke, By the World Forgot (2013) 120. In 333. Bleiler (1978), p. 20. Reginald 01098. A fine copy. (#165851) (Inventory #: 165851)
$100.00 add to cart or Buy Direct from L.W. Currey
Share this item
L.W. Currey Inc.
Offered by