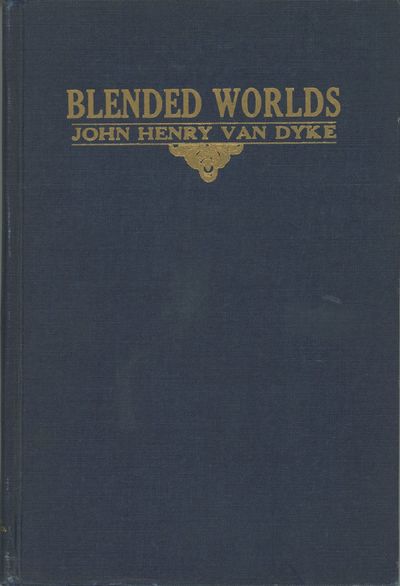 by Van Dyke, John Henry
Miami, Arizona: Southern Arizona Publishing Co., 1927. Octavo, pp. [1-6] [1-3] 4-243 [244-250] [note: first two and last three leaves are blanks], original blue cloth, front and spine panels stamped in gold. First edition. Limited to 100 copies numbered and signed by Van Dyke, plus some out-of-series copies, this being one of the latter. Eccentric occult science fiction novel, sequel to THE FLASH, also privately printed by the author in an edition of 100 copies in Miami, Arizona, in 1927. THE FLASH and its sequel first appeared as serials in the Miami, Arizona, DAILY SILVER BELT. This is definitely not your usual Victorian, talking-heads-in-flowing-white-robes kind of occult romance; but rather a wild and wooly tale in the American tradition of such works as RONDAH, REVI-LONA, and DR. ZELL AND THE PRINCESS CHARLOTTE. It's a red-blooded, action-packed adventure, blending backdrops of the Wild West and the Roaring Twenties, complete with bootleggers, prize fighters, romantic passion, grizzled prospectors, super science and a bizarre 25-page journey through an underworld cavern in which we learn about Glowhumes, unsaturated Electrohumes, the Ancient Order of Wasted Propaganda, radicals and coefficients, the Interrogator and the Disseminator, and the progressive concentration of "sparkles" as one ascends the food chain. Taken together, they form the wacky, sui generis occultism that animates this story philosophically. Here is a quest whose hunted treasure turns out to be multilayered both figuratively and literally. It follows the adventures of Charlie, Mary and Frank (brother, sister, friend) in search of unspecified treasure at the foot of Sleeping Beauty, seen in a vision in Chicago, drawing them across the country in a covered wagon until they arrive in Arizona at a mountainous formation that looks like a giant Sleeping Beauty. Charlie is given to trances and astral travel, and early on in the story fails to return from one. It is his corpse, strapped to a rubber air mattress gliding sideways across a raging river that initiates the trip to the underworld. Mary is beautiful, quick, ethereal and extremely devoted to Charlie. Frank is brawny, slow, down-to-earth and extremely devoted to Mary. The story in large part is about how Mary becomes more earthy (and humble) and Frank more spiritual (and confident) until they pass through all the inner and outer obstacles keeping them apart as a romantic couple. Along the way, Frank becomes a champion prize fighter under the management of Dorothy, a feisty and fetching schoolteacher who gets off a bus to help Frank after the storm that separates him from Mary, but who then gets a taste of the fast life on Frank's winnings and finds another lover. Mary becomes a celebrated mind-reader, fortuneteller and faith-healer under the cynical management of her Uncle Joseph, a cagey prospector fond of doing vocal impressions. Van Dyke lacks the polish of the professional writer and is sometimes awkward, abrupt or confusing; but he tells a complex yet fast-moving story and tells it with suspense, psychological credibility, thematic depth, and comedy (sometimes unintentional). Most impressive is how he combines customarily opposite qualities, writing convincingly of the city and the desert, the boxing ring and a magical cavern, crooks and angels, thus making his book itself an intriguing example of blended worlds. A significant book that should be better known. Not in Bleiler (1948; 1978), Reginald (1979; 1992) or Day (1963). Locke, A Spectrum of Fantasy Volume II, p. 110. Front free endpaper missing, else a very good copy. An uncommon book. (#165872) (Inventory #: 165872)
$250.00 add to cart or Buy Direct from L.W. Currey
Share this item
L.W. Currey Inc.
Offered by