IN THE DWELLINGS OF THE WILDERNESS .. 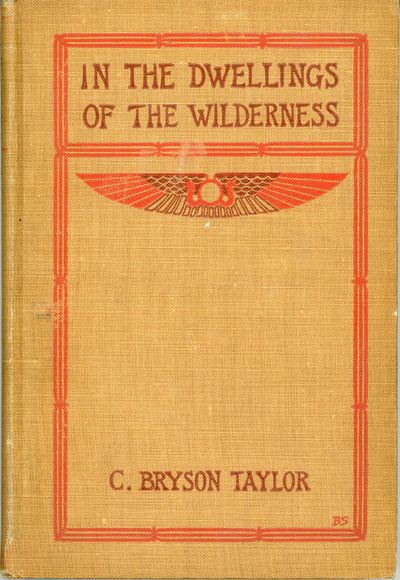 by Taylor, C. Bryson
New York: Henry Holt and Company, 1904. Octavo, pp. [1-8] [1] 2-184 [185-188: ads], fly leaves at front and rear, title page printed in red and black, original pictorial tan cloth, front and spine panels stamped in brown and red. First edition. A later issue that does not include the two inserted plates found in the first issue. "A team of British archaeologists unearths the mummified remains of an Egyptian princess who was said to be possessed by a demon. Her body disappears during the night and, shortly thereafter, a woman as beautiful as any creature created by God or the devil appears to the workers and beckons to them to follow her into the night. Those who do so are never seen again. When, Deane, the leader of the expedition, ventures into the desert in search of one of the missing men, he becomes lost and is blinded by the sun. Miraculously, he finds his way back to camp. As he nears the excavation 'something' bites him on the shoulder and tries to drink his blood, but he fights it off. Deane and the remaining members of his party depart the next morning, leaving the desert to its secrets. One of the 50 top vampire novels." - Robert Eighteen-Bisang. Despite a somewhat incredulous ending, this vivid, well-written tale of a bloodsucking mummy is a classic of its kind. Clareson, Science Fiction in America, 1870s-1930s 747. Reginald 14000. Not in Bleiler (1948; 1978). Smith, American Fiction, 1901-1925 T-69. Early owner's signature on the front free endpaper. A clean, tight, nearly fine copy. A major genre rarity. (#165853) (Inventory #: 165853)
$500.00 add to cart or Buy Direct from L.W. Currey
Share this item
L.W. Currey Inc.
Offered by