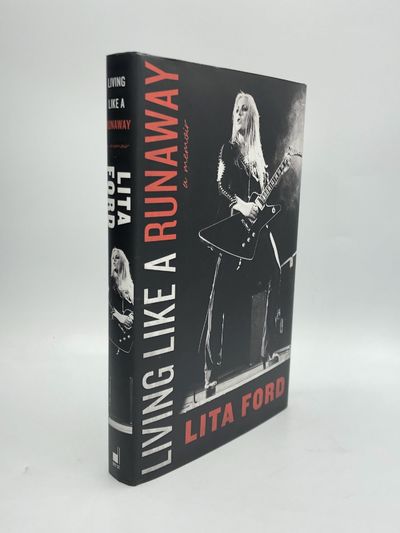 by Ford, Lita
New York: Dey St, 2016. First Edition. Hardcover. Fine/Fine. Signed by Ford on the verso of the contents page. "Lita Ford was one of heavy metal's 'exceptions.' This means ninth-graders constantly used her as a pertinent example whenever they wrote an essay for English class that argued metal was more than just satanic cock rock (in case you're curious, the Christian supergroup Stryper was the other overused 'exception' for these arguments). Ford began her career in the seminal all-female band the Runaways, a group that has since become a favorite among rock writers. The other star from the Runaways, Joan Jett, became a successful solo artist, but people rarely considered her version of hard rock to be metal ... Lita took a different path. She was metal to the core, even marrying Chris Holmes of W.A.S.P. (that move heightened her 'bad girl' credibility, because Holmes had posed in the 'For Ladies' section of Hustler magazine and evidently has a huge dick). In a lot of ways, she tried to embody the fantasy image created by all those macho male groups. And - at least in 1988 - she succeeded" (Chuck Klosterman, Fargo Rock City). That was the year her hit singles Kiss Me Deadly and Close My Eyes Forever (a duet with Ozzy Osbourne) pervaded teenage bedrooms and high school parking lots across America. The England-born, Long Beach, California-raised Ford (b.1958) recalls this and other successes, as well as her personal and professional struggles, in this straight-talking memoir. Foreword by Dee Snider. Textual photographs, including many in color. Octavo. Minor bump to the spine heel; else fine in a fine dust jacket. (Inventory #: 70472)
$75.00 add to cart Available from Johnson
Share this item

London : Hamish Hamilton , 1964
(click for more details about ENTERTAINING MR SLOANE: A Comedy)
View all from this seller>