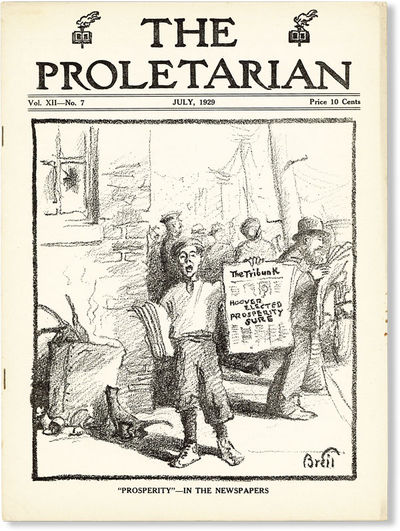 by [RADICAL PERIODICALS] [POLITICAL CARTOONS & CARICATURE] KERACHER, John (ed); BREITMAYER, Milton (illus)
Chicago: Proletarian Party of America, 1929. First Edition. Paperback. Official organ of the Proletarian Party of America, a left-wing splinter group which, like the Communists, broke from the Socialist Party in 1919. Due to doctrinal differences with the founders, the PP split early on with the American Communist Party, remaining a small, distinct and contrarian entity until its eventual dissolution in 1971. The Proletarian was edited by long-time party leader John Keracher, who also assumed editorial control of the Chicago publishing firm of Charles H. Kerr following Kerr's retirement in 1928. All but the earliest issue in this run feature full-page cover illustrations by cartoonist Milton Breitmayer (signed "Breit"), a highly talented and under-recognized caricaturist in the Art Young / Robert Minor mold. GOLDWATER 215. Quarto (30cm); illustrated wrappers, stapled; 16pp. Mild wear and dust-soil to wrapper extremities, with a few small foxed spots along right margin of front wrapper, else a well-preserved, Near Fine copy. (Inventory #: 48603)
$40.00 add to cart or Buy Direct from
Lorne Bair Rare Books
Share this item

Nineteen Eighty-Four: The Facsimile of the Extant Manuscript

London : Secker and Warburg , 1984
(click for more details about Nineteen Eighty-Four: The Facsimile of the Extant Manuscript)
View all from this seller>