The Vantage Point: Perspectives on the Presidency. 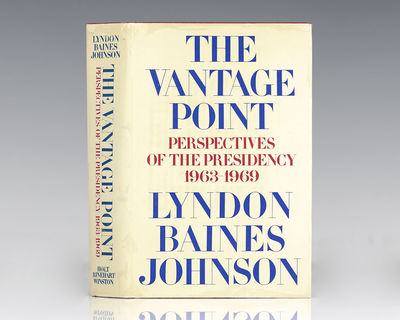 by Johnson, Lyndon Baines
New York: Holt Rinehart and Winston, 1971. First edition of President Johnson's autobiography. Octavo, original red cloth, pictorial endpapers, illustrated with 72 pages of photographs. Signed by Lyndon Baines Johnson on official White House bookplate affixed to the half-title page. Fine in a near fine dust jacket. Jacket design by David November. Jacket photograph of Johnson by Y. R. Okamoto. In The Vantage Point, one of the most complex and fascinating men to occupy the Presidency of the United States describes his years in the White House. In the books preface, Johnson states: "I make no pretense of having written a complete and definitive history of my Presidency. I have tried, rather, to review that period from a President's personal and political philosophy, a President's experience and knowledge...and a President's response to the demands that were made of him." The book was published in the same year that the Lyndon Baines Johnson Library and Museum opened on the campus of The University of Texas at Austin. (Inventory #: 110772)
$400.00 add to cart or Buy Direct from
Raptis Rare Books
Share this item