The Professor at the Breakfast Table. 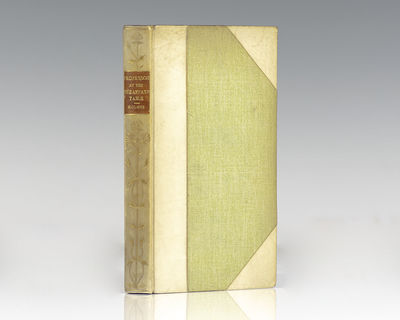 by Holmes, Oliver Wendell
London: J. M. Dent & Co, 1905. Finely bound example of Holmes' famed work of prose. Octavo, bound in three quarters vellum with gilt tooling to the spine, red morocco spine label lettered in gilt, marbled endpapers, top edge gilt, illustrated with engravings including tissue-guarded frontispiece. In very good condition. A member of the Fireside poets, American physician, poet, and polymath Oliver Wendell Holmes Sr. was acclaimed by his peers as one of the best writers of the day. His most famous prose works are the "Breakfast-Table" series, which began with The Autocrat of the Breakfast-Table (1858), which first appeared in Atlantic Monthly and later became a three volume series. (Inventory #: 111034)
$100.00 add to cart or Buy Direct from
Raptis Rare Books
Share this item

They Call Me Coach.

New York : Prentice-Hall , 1952
(click for more details about The Power of Positive Thinking.)
View all from this seller>