The Christian Pattern, or the Imitation of Jesus Christ, being an abridgement of the works of Thomas a Kempis. By a Female Hand. 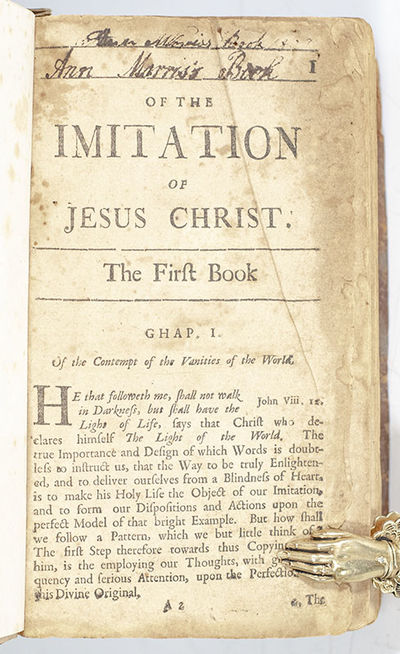 by a Kempis, Thomas
Germantown: reprinted by Christopher Sowr, 1749. First American edition of The Imitation of Christ and the first printing of any work by a Kempis in America and one of the earliest works of Catholic Americana. In very good condition with some browning to the text and rubbing to the extremities. The Imitation is perhaps the most widely read Christian devotional work next to the Bible, and is regarded as a devotional and religious classic. Its popularity was immediate, and it was printed 745 times before 1650. Apart from the Bible, no book has been translated into more languages than the Imitation of Christ at the time. The text is divided into four books, which provide detailed spiritual instructions: "Helpful Counsels of the Spiritual Life", "Directives for the Interior Life", "On Interior Consolation" and "On the Blessed Sacrament". "A Female Hand" was the pseudonym for Elizabeth Singer Rowe, used in the Philadelphia edition of her works." (Evans, 6342) "Although Saur bought roman type from Franklin as early as 1743, the abbreviated translation of De Imitatio Christi by the English writer of pious works, Elizabeth Rowe, is his first English language publication." (Germantown and the Germans. An Exhibition of Books, Manuscripts. Edited by Edwin Wolf II). "Scarce, as most of the books printed at Germantown were used for cartridges during the revolution." (Sabin) "The most widely read devotional manual apart from the Bible, perhaps even surpassing the influence of such books as Pilgrim's Progress and St. Augustine's Confessions . an expression of the German-Dutch mystical school of the fifteenth century, its message stressed the humble Christian virtues as they were preached in the Sermon on the Mount" - Printing and the Mind of Man 13. Sabin 37343 (Inventory #: 112577)
$3,000.00 add to cart or Buy Direct from
Raptis Rare Books
Share this item

Toward the African Revolution (Political Essays).

Plunging into Politics: How to Become or Support a Candidate of the National, State, of Local Level.

by Loeb, Marshall and William Safire

New York : David McKay Company, Inc. , 1964
(click for more details about Plunging into Politics: How to Become or Support a Candidate of the National, State, of Local Level.)
View all from this seller>