Around the World, Single-Handed: The Cruise of the Islander. 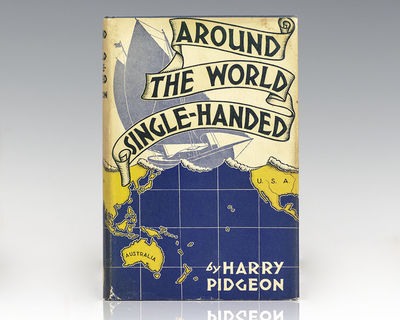 by Pidgeon, Harry
New York: D. Appleton and Company, 1933. First edition of this well written, exciting, and true-to-life story. Octavo, original cloth, pictorial endpapers, illustrated. From the library of James Stephen "Steve" Fossett with his bookplate to the pastedown. American businessman and record-setting aviator Steve Fossett became the first person to fly solo nonstop around the world in 2002 in his 10-story high balloon Spirit of Freedom. He completed the 2002 trip in 13 days, 8 hours, and 33 minutes and set records for both the Longest Distance Flown Solo in a Balloon and Fastest Balloon Flight Around the World. Fossett was also one of sailing's most prolific distance record holders set the Absolute World Speed Record for airships with a Zeppelin NT in 2004. He received numerous awards and honors throughout his career including aviation's highest award, the Gold Medal of the Federation Aeronautique Internationale (FAI), which he was awarded in 2002. Fossett disappeared on September 3, 2007 while flying a light aircraft over the Great Basin Desert, between Nevada and California. Near fine in the rare original dust jacket. A very nice example with noted provenance. "The Islander was my first attempt at building a sailboat, but I don't suppose there ever was an amateur built craft that so nearly fulfilled the dream of her owner, or that a landsman ever came so near to weaving a magic carpet of the sea." So begins this fascinating first-person narrative by a man who did what many dream of but few accomplish. Between 1921 and 1925 Harry Pidgeon circumnavigated the globe in a sailboat of his own construction, experienced many thrilling adventures in the far corners of the world, and relied mainly on his own strength, skill, and resourcefulness to survive. After building his 34-foot yawl (at a cost of $1,000 for materials and a year and a half of hard work), the author sailed from California west across the Pacific to Hawaii in a test voyage. Then, from Los Angeles he cruised to lush and fabled islands -- the Marquesas, Tahiti, Samoa, Fiji, New Hebrides, and New Guinea. With grace and economy, Mr. Pidgeon describes memorable encounters with native peoples (including suspected cannibals), tribal rites and rituals, the warm hospitality afforded him at many a remote harbor, good times with new friends and, of course, the delights of sailing. But there was danger and hardship as well, as he navigated his small craft through raging gales and giant seas, and a near-catastrophe when the Islander ran aground off the coast of South Africa. (Inventory #: 112344)
$750.00 add to cart or Buy Direct from
Raptis Rare Books
Share this item