Mani: Travels In The Southern Peloponnese. 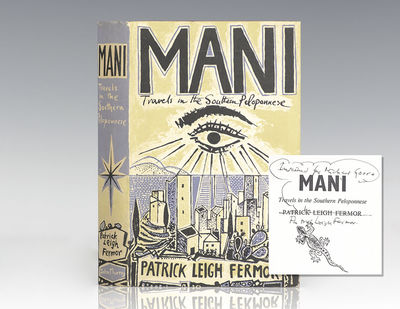 by Fermor, Patrick Leigh
London: John Murray, 1958. First edition of the author's travelogue about the rocky Mani, later complementing it with Roumeli: Travels in Northern Greece. Octavo, original cloth, frontispiece and title-page vignette by John Craxton, map of the southern Peloponnese by John Woodcock, and 26 photographs by Joan Eyres Monsell. Association copy, inscribed by the author on the title page, "Inscribed for Michael Gorra by Patrick Leigh Fermor." Near fine in near fine dust jacket with light wear. Jacket design by John Craxton. "His greatest book, Mani, was about a journey through that little-known and, at the time, archaic region.[He] traveled simply, staying with fishermen and farmers, which enabled him to capture the essence of the region.Almost every page has its own literary tour de force, often with intimidating displays of learning and research mixed with fantasy, imagination and acute descriptions of the scene itself" (Robin Hanbury-Tenison, Geographical). "Mani and Roumeli: two of the best travel books of the century" (Financial Times). (Inventory #: 112599)
$1,400.00 add to cart or Buy Direct from
Raptis Rare Books
Share this item