The Keynesian Recovery and Other Essays. 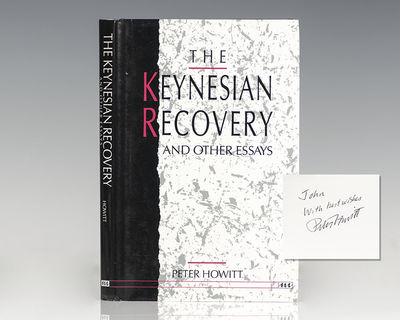 by Howitt, Peter [John Maynard Keynes]
Ann Arbor: The University of Michigan Press, 1990. First edition of Howitt's collected essays analyzing Keynesian and Walrasian economics. Octavo, original boards. Inscribed by the author on the front free endpaper, "John with best wishes Peter Howitt." Laid in is an additional note inscribed by the author which reads, "12/9/14 John, With best wishes and many thanks for the kind words. Peter." Fine in a fine dust jacket. Howitt's The Keynesian Recovery brings together the author's key contributions to the development of macroeconomic theory. The essays record his attempts to deal with the coordination of problems raised by Keynesian economics and the difficulty of modeling them in a way that meets the standards of rigor and coherence set by Walrasian equilibrium theory. Howitt ultimately argues that the reduction in this coordination problem to sticky prices is at the root of the decline of Keynesian economics. (Inventory #: 110737)
$100.00 add to cart or Buy Direct from
Raptis Rare Books
Share this item