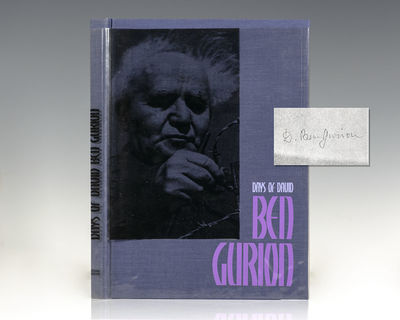 by Ben-Gurion, David
New York: Grossman Publishers, 1967. First edition of this wonderfully illustrated account of the first prime minister of Israel David Ben-Gurion. Quarto, original cloth, illustrated. Boldly signed by David Ben-Gurion on the title page. Edited by Ohad Zamora, Mordechai Barkai, Nahum Pundak and Israel Stockmann. Introduction by S.Y. Agnon. Fine in a fine pictorial acetate dust jacket. David Ben-Gurion's life has been so completely identified with Jewish history that "Israel: A Personal History" amounts to an autobiography. With this book, Ben-Gurion joins the small company of great historical figures who have left for posterity a personal record of the events in which they were prime movers. (Inventory #: 111748)
$1,150.00 add to cart or Buy Direct from
Raptis Rare Books
Share this item