Dissertations on Government, the Affairs of the Bank, and Paper Money. 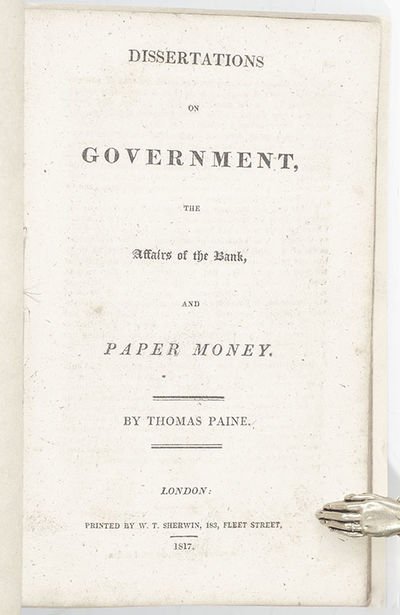 by Paine, Thomas
London: Printed by W.T. Sherwin, 1817. First British edition of Paine's defense of the Bank of North America. Small octavo, bound in modern wrappers. In near fine condition with light toning to the extremities. "Another time that tried men's souls occurred in 1780 when the American troops were at the end of their patience because of lack of pay and scarcity of supplies. Serious features of mutiny and sedition had already appeared. A tone of discouragement swept through the Pennsylvania Assembly, for the treasury was empty. One member said, 'We might as well give up first as last.' But Paine did not agree, and when he drew his meager salary, he took $500 and started a subscription for the relief of soldiers. Robert Morris and many others followed, and by June 18, 1780, had raised 300,000 pounds and started a bank which supplied the army through the campaign...When the bank came under attack by those who favored inflation after the war, Paine rushed to its defense with this pamphlet..."(Gimbel 45). In very good condition with the title page backed with some restoration, period ownership signature, stamp to the verso of page 53, notations throughout. (Inventory #: 112396)
$8,200.00 add to cart or Buy Direct from
Raptis Rare Books
Share this item