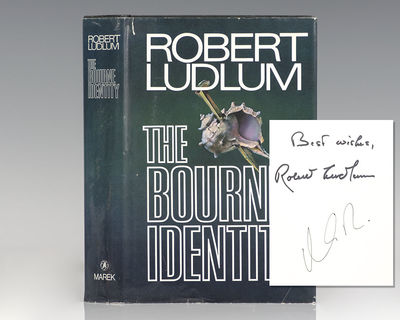 by Ludlum, Robert
New York: Richard Marek Publishers, 1980. First edition of the first novel in the Bourne Trilogy. Octavo, original cloth. Signed by the author on the front free endpaper, "Best wishes, Robert Ludlum." Additionally signed by the actor Matt Damon on the front free endpaper. Damon played Jason Bourne in several of the Bourne films. Near fine in a near fine price-clipped dust jacket. Jacket illustration by Rob Sauber. Jacket photograph by Michelle Ryder. Uncommon signed by both Ludlum and the Academy Award-winning actor. The first novel in the Bourne Trilogy, The Bourne Identity introduces Jason Bourne, a man who finds himself with both remarkable survival skills and retrograde amnesia. In the search to rediscover his true identity, Bourne must also reason out why several shadowy groups, a professional assassin, and the CIA want him dead. Peter Cannon of Publishers Weekly named The Bourne Identity among the best spy novels of all time, after John le Carre's The Spy Who Came in from the Cold. The novel was adapted into a film of the same name starring Matt Damon, Franka Potente and Chris Cooper. (Inventory #: 112772)
$850.00 add to cart or Buy Direct from
Raptis Rare Books
Share this item