At One With The Sea: Alone Around the World. 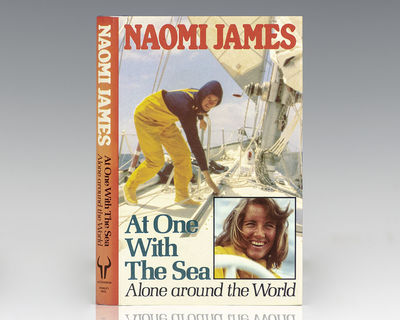 by James, Naomi
London: Hutchinson/Stanley Paul & Co. Ltd, 1979. First edition of the first woman to sail alone around the world by way of Cape Horn's account of her voyage. Octavo, original cloth, cartographic endpapers, illustrated. From the library of James Stephen "Steve" Fossett with his bookplate to the front pastedown. American businessman and record-setting aviator Steve Fossett became the first person to fly solo nonstop around the world in 2002 in his 10-story high balloon Spirit of Freedom. He completed the 2002 trip in 13 days, 8 hours, and 33 minutes and set records for both the Longest Distance Flown Solo in a Balloon and Fastest Balloon Flight Around the World. Fosset was also one of sailing's most prolific distance record holders set the Absolute World Speed Record for airships with a Zeppelin NT in 2004. He received numerous awards and honors throughout his career including aviation's highest award, the Gold Medal of the Federation Aeronautique Internationale (FAI), which he was awarded in 2002. Fossett disappeared on September 3, 2007 while flying a light aircraft over the Great Basin Desert, between Nevada and California. Fine in a fine dust jacket. The first woman to sail solo around the world by way of Cape Horn and the second woman to have ever sailed solo around the world, Naomi James completed her voyage around the globe on June 8, 1978 after 272 days, thus improving Sir Francis Chichester's solo round-the-world sailing record by two days. James was made a Dame Commander of the Order of the British Empire in 1979 in recognition of her achievements. (Inventory #: 111253)
$35.00 add to cart or Buy Direct from
Raptis Rare Books
Share this item