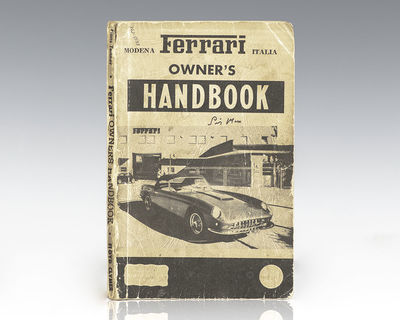 by Tanner, Hans [Stirling Moss]
Los Angeles: Floyd Clymer, 1960. First edition of this ferrari manual. Octavo, original illustrated wrappers. In good condition. Signed by Stirling Moss on the front panel. Founded by Enzo Ferrari in 1939, Italian luxury sports car manufacturer Ferrari has, throughout its history, been noted for its continued participation in racing, especially in Formula One, where it is the oldest and most successful racing team, holding the most constructors championships (16) and having produced the highest number of drivers' championship wins (15). In 2014, Ferrari was rated the world's most powerful brand by Brand Finance and, in June of 2018, the 1964 250 GTO became the most expensive car in history, setting an all-time record selling price of $70 million. (Inventory #: 11244)
$375.00 add to cart or Buy Direct from
Raptis Rare Books
Share this item