First on the Antarctic Continent; Being an Account of the British Antarctic Expedition 1898-1900 [Southern Cross] 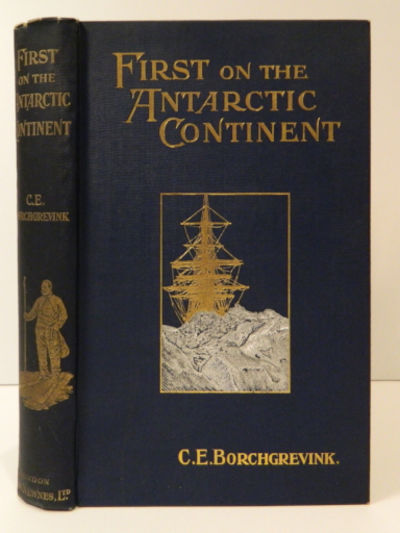 by Borchgrevink, C. E.
London: George Newnes, Limited [William Clowes and Sons, Printer], 1901. First Edition, 1st Printing. Very Good. 8vo [8.75x6in]; xvi, 333 pp., [3], tipped in maps, 32 pp. [publisher's advertisements with date 1.01], frontispiece photogravure portrait of Borchgrevink, 196 images on 17 plates and in text, three color fold out maps showing tracks and landings of the "Southern Cross" and one sketch in text, appendices with charts and tables, index; Dark blue cloth covers with gilt lettering on front and spine, gilt illustration of Borchgrevink on spine, bordered gilt illustration of "Southern Cross" ship in silver ice field on front, top edge gilt, fore edge untrimmed, black coated end papers; Minimal shelf wear with slight rubbing to corners and bottom of spine, small splits to top of spine, prior owner ink stamp on verso of front end paper, small closed tear to title page at fore edge and several subsequent pages, spine gilt slightly darken, small closed chip at gutter with minimal loss to plate facing p. 204, small closed tear to p.221 top edge. [Rosove 45.A1a, Spence 152, Howgego III B30, Conrad p 91,Taurus 24]. Carsten Egebert Borchgrevink (1864-1934) was a Norwegian, trained in natural sciences and forestry, that emigrated to Australia in 1888. He gained polar experience as a member of the 1893-95 Antarctic expedition led by Henryk Bull, another Norwegian emigre to Australia. This commercial expedition was the first documented landing on the Antarctic Continent at Cape Adare, January 24, 1895 by Borchgrevink, Bull and four others. Upon return to Australia, Borchgrevink lectured on the geographic, geological and biological findings and began promoting an expedition to winter over at Cape Adare and find the South magnetic pole in the following summer. As an "outsider" Borchgrevink was unable to gain support from the Royal Geographical Society. He was able to convince the wealthy publisher Sir George Newnes to financially back the expedition. He then purchased a sealing ship, refitted and renamed her the "Southern Cross" to sail under the British flag. The expedition left London in August 1898 and arrived at Cape Adare in February 1899. Borchgrevink and a party of nine other men and 75 sledge dogs set up prefabricated huts at winter camp below Cape Adare on the Antarctic mainland. While the expedition did not complete all the goals, they did show that it was possible to winter over in the extreme cold and weather conditions. They also made a sledging trips that discovered various routes inland to geological features and across the Ross Ice Shelf, where they achieved the farthest South at 78.50'. They discovered the northward movement of the Ross Ice Shelf, made meteorological observations, geological collections and discovered the emperor penguin rookery at Cape Crozier (which will play a large role in the Scott expedition). Another unfortunate first was the death of Nikolai Hanson and was the first person to be buried on Antarctica.They brought back small, but valuable, collection of scientific data that would add to the knowledge of Antarctica to future expeditions. This book was, unfortunately, badly written and was not well received. Another member of the expedition, Louis Bernacchi, who would become one of the few members with Antarctic experience of Robert Falcon Scott's Discovery expedition in 1901, wrote a highly readable account of the Borchgrevink expedition. Despite the flaws in narrative, Rosove calls it "one of the most important in the Antarctic bibliography (Inventory #: 13741)
$2,013.00 add to cart Available from
David Spilman Fine Books
Share this item