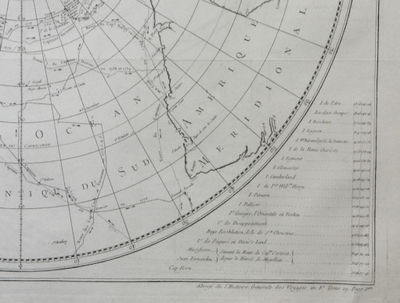 by Cook, James
Paris: Hôtel de Thou, 1780. First Edition. Map. Near Fine. [Neatline 21x21in, Sheet 22.25x22.75in]; A circular map of southern hemisphere, centered on South Pole (90 S) to Equator (0 ) with detailed longitude and latitude lines, tracks of 12 earlier explorers from Mendana (1595) to Surville (1769) and detailed tracks of Cook and Furneax (1772 to 1775), list of 60 islands and locations with latitude and longitude in margins; Copperplate engraving by Robert Bernard; Heavy off white paper with minimal age spotting or toning, faint fold creases, faint offset of from printing process, tape stains at corners on verso from earlier mounting. [Beddie 1222 & 10, Spence 3039a, Hill 358 (London)]. Captain James Cook (1728-1779), British explorer, navigator and cartographer, is considered one of the greatest of British explorers in the 18th Century. His three voyages of exploration to the South Pacific, Antarctica, the Pacific Northwest and Siberia, spanning twelve years from 1768 to 1780, were significant in navigation and discovery. The voyages had many first contacts with natives in Australia, New Zealand, Hawaiian and Polynesian islands and substantially contributed to the knowledge of the world. This French engraving was first published in the 1778 edition of Voyage au Pôle et autout du monde ..., which was almost identical to the London edition. This copy was published in a 1780 edition of Abrégé De L'Historie Générale Des Voyages. This important and comprehensive map was first published as Plate No. 1 in the 1777 London account of Cook's second voyage. It shows the entire southern hemisphere with ship tracks from Cook and other voyages, location and relationship of continents and islands, and the discoveries from Cook's first (1768-1771) and second (1772-1775) voyages. With the success of the first voyage discovering the South Pacific islands, he was sent on a second voyage with the ships Resolution and Adventure to explore far south to discover a southern continent. They also charted islands and lands of the South Pacific in a comprehensive manner, while search for the Southern Continent. The map shows Van Diemen Land (Tasmania) connected to New Holland (Australia), which was not discovered as an island until 1799. From Hill, "Cook proved that there was no "Terra Australis" which supposedly lay between New Zealand and South America, but became convinced that there must be land beyond the ice fields. The men of this expedition became the first to cross the Antarctic Circle [multiple times].". (Inventory #: 13746)
$655.00 add to cart Available from
David Spilman Fine Books
Share this item