The Wonders of the Yosemite Valley, of California; [John P. Soule, photography credit] 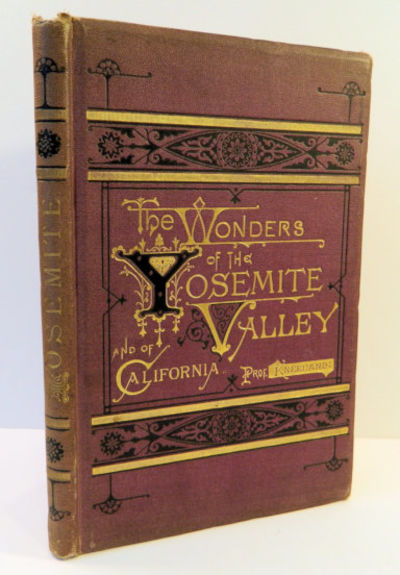 by Kneeland, Samuel
Boston: Alexander Moore, 1871. First Edition. Very Good. John P Soule. 8vo. [10.75x7.25in]; xii, 13-71 pp., frontispiece original albumen photograph of The Yosemite Valley, seven additional mounted photographs (of listed ten ten images) with tissue guards on only two, 3 illustrations in text, index and list of images; Original mulberry cloth on beveled boards with black and gilt stamped lettering on front and spine, stamped gilt and black design on front and in blind on back cover, all edges gilt, pale yellow end papers, all pages with red rule border; Typical shelf wear to edges, corners and covers, frayed cloth on all corners, general wear to cover along edges, spine sunned, gilt still bright.[Currey & Kruska 225, Farquhar 10a]. Samuel Kneeland (1821-1888) was a surgeon in the Union Army until 1866 and was the Secretary of the Massachusetts Institute of Technology at its founding in 1865 to 1878 and a professor of Zoology and Physiology from 1869 to 1878. He traveled for collecting specimens and wrote several travel books in addition to this one on Yosemite. The California Sierra Nevada mountains and Yosemite was promoted by articles and guide books by James Mason Hutchings starting in the 1850's. Yosemite was designated by Lincoln as the first national park in 1864 and others followed to publish guide books.This book is the first of several editions that were attractive and provided reliable information about the Yosemite Valley and California. The is a narrative of Kneeland's first railroad trip from Boston to Yosemite. Additional trips added and updated information and included information from John Muir and others about the valley. The photographs, credited to John P. Soule (1828-1904), a photographer and Boston publisher that never visited Yosemite Valley, were likely purchased by him from a California photographer. From Currey & Kruska, this was a common transaction and the style is similar to Eadweard Muybridge, famous for his images of the Yosemite. (Inventory #: 13770)
$403.00 add to cart Available from
David Spilman Fine Books
Share this item