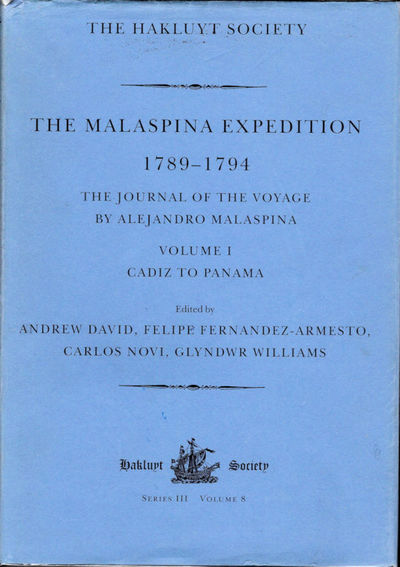 by Malaspina, Alejandro [Andrew David, et al. Ed.]
London: The Hakluyt Society, 2001. First Edition. Fine/Near Fine. [10x7.25in]; Vol. I - Cadiz to Panama, xcvii, 338 pp., 39 color and monochrome illustrations on plates and in text including frontispiece of Malaspina, 10 sketch maps; Vol. II - Panama to the Philippines, xx, 511 pp., 44 color and monochrome illustrations on plates and in text including frontispiece of Bustamante, 7 sketch maps; Vol. III - Manila to Cadiz, xxi, 487 pp. 30 color and monochrome illustrations on plates and in text including frontispiece of Malaspina, 6 sketch maps, all volumes include appendices and index in Vol. III; Dark blue cloth covers on boards with gilt lettering on spine and illustration of the ship 'Victoria' on front, all volumes include color world map with tracks of the corvettes 'Descubierta' and 'Atrevida' voyages; all edges trimmed; Negligible shelf wear to books or dust jackets, Vol. III dust jacket spine faded. [Howgego I M26]. Alejandro Malaspina (1754-1810) was from Tuscany and joined the Spanish navy as a midshipman in 1774. Over the next 15 years he gained experience in navigation and exploration in several circumnavigation's and skills in several major battles. In 1786 he commanded another voyage of commerce for the Royal Philippines Company. This was a period of exploration by Cook (British), LaPerouse (French), the Russians and others to discover the Northwest or Northeast passage route, perfect claims to lands and ports, and commercial opportunities. Malaspina was encouraged by the Military Governor of Chile, Ambrose O'Higgins, to organize a similar expedition by Spain.In July 1789, Malaspina and Jose Bustamante, in command of the corvettes 'Descubierta' (Discovery) and 'Atrevida' (Bold), respectively, sailed from Cadiz on a five year ambitious scientific and political voyage to the Pacific. They were to survey and chart the islands and coasts under Spanish control or claim, visit the major settlements throughout the Pacific, and collect information on botany, zoology, ichthyology, ethnography and geography. They were also to assess the commercial opportunities and, under secret orders, were to find the Strait of Anian (Bering Strait) and Northwest passage route. Much of this organization and planning was similar to Cook's voyages and the desire was to confirm and expand the information from Cook. Malaspina's voyage was successful and brought back information from confirmed and new discoveries. Unfortunately, Malaspina was caught up in the Spanish political and was unable to complete the writing of his journals and findings. Almost 90 years later, his unedited papers were published in Spain in 1885 and in 1990 to 1996, his journals and other information were published by the Museo Naval. This book is a translation of the publication sand, as typical of the Hakluyt Society, was greatly expanded and edited with additional and supporting information on the people and the voyage. (Inventory #: 13782)
$173.00 add to cart Available from
David Spilman Fine Books
Share this item