Sketch of General Riley's Route through the Mining Districts July and Aug. 1849; Copied from the Original Sketch by Lt. Derby in the Office of the 10th Military Department by J Mc. Hollingsworth, Asst. [Ackermann's Lithograph] [31st Congress, 1st Session. Senate Report 18. Serial 577, Map No. 6 and House Ex. Doc. No. 17, Message of the President] 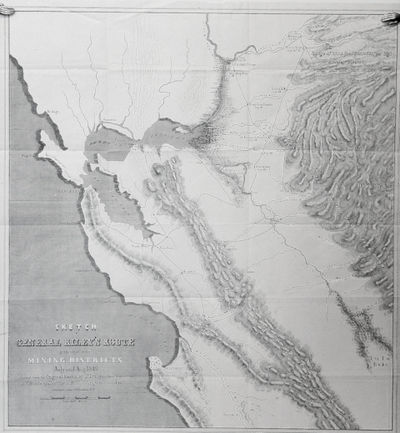 by Derby, George Horatio Lt
Washington DC: Government Printing Office, 1850. First Edition. Near Fine. [Neatline 21x19.75in, Sheet 21.75in]; Title in lower left corner with different stylized lettering; A lithograph map of Northern California from just south of Monterey to just north of Sacramento and from the Pacific Ocean to the Sierra foothills; Showing General Bennett Riley's route through the mining districts with dates visiting the mining camps in the Sierra foothills; The map is printed on thin paper and the fold creases are evident, neat lines are all present, small chips and closed tear along edges, removable mounted on acid free foam board. [Wheat Maps 79, Kurutz 106a, Wagner-Camp 179b]. This is an important and, at the time, a highly desirable map of California Gold Rush diggings. The map was part of the Senate and House reports of Brev Brig Gen. Bennett Riley dated at Monterey on September 20, 1849 entitled "Report of a Reconnoissance of a Portion of the San Joaquin and Sacramento Valleys". (From Wheat). The map provides the earliest names and location of the mining camps and diggings in the central Sierra foothills along the American, Cosumne, Dry Creek, Mokelumne, Calaveras, Stanislaus, Tuolumne, Merced, Lost Creek, Maraposa [sic] and King rivers of the Central Valley draining to the San Joaquin river. The more populated camps were Mormon Island (misspelled Mormont), Coloma (mislabeled Colluma), Curtis, Sullivan's, Jamestown, Woods, Maj. Miller's and Sonoran Camps. Lt. Derby provides topographical and travel conditions along the routes with dates and details in the geography, terrain and communities. General Bennett Riley (1787-1853) was the 6th and last Military Governor of California in 1849. He ordered four surveys of California to be lead by Lt. George Derby (1823-1861). From Wheat, "... George Horatio Derby (1823-1861), born at Dedham, Massachusetts, April 2, 1823, graduated from West Point in 1846, and after a tour of duty in the East and Middle West, came to California in 1849. He accompanied Brig Genl. Bennett Riley on a tour of the gold districts during the summer of that year, and his `Sketch of General Riley's Route' was the result of that journey." The purpose was to identify existing settlements and mining camps and determine locations of strategic military supply routes and posts to "... afford protection for and from the Indians and keep the peace among the gold miners." [William H. Goetzmann, Army Exploration in the American West 1803-1863, Yale University Press, 1959, p.255]. This map relates to another important early map of the Sacramento Valley surveyed in September and October 1849 from north of Sacramento City to the Butte River (the second survey ordered by General Riley). (Inventory #: 13745)
$660.00 add to cart Available from
David Spilman Fine Books
Share this item