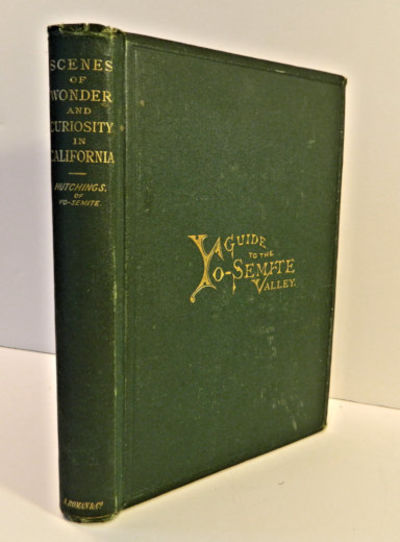 by Hutchings, J.M.
New York: A. Roman and Company, 1870. Third Edition, 1st Printing. Very Good. [8.75x6.5in]; [4]. 5-292 pp., [4] advertisements, 104 illustrations included frontispiece of Yo-Semite Valley with tissue guard, two maps of routes to and of the Yo-Semite Valley, and others in text, errata note p. 292; Original dark green pebbled cloth covers on beveled boards, gilt lettering on front and spine, blind stamped boarders on covers, coated brown end papers, all edges trimmed; Some shelf wear to corners and edges, corners frayed, small tears and rubbing to top and bottom of spine, minor rubbing to joints and covers, coating on end papers rubbed, minor foxing spots in text, closed tear to tissue guard, front hinge loose, small old ink stain through p. 30-34, offset shadows and dried remnants from pressed leaves and flowers p.50 to 55. [Currey & Kruska 164, Farquhar 4f, Kruska 76h]. James Mason Hutchings (1820-1902) was one of the many Englishmen that came to California in 1849 for the Gold Rush. He made his fortune in mining, published the "Hutchings' California Magazine" (1856-1861) and was one of the early tourist promoters of the wonders of Yosemite Valley, the Big Trees and California. As a businessman, he established a hotel in the valley floor and, after named as a State Park in 1864, he claimed land under preemption laws. He lost his claim and was banished from the Valley in 1875. He settled in San Francisco promoting and operating a tourist agency, printing guidebooks, and leading trips as a Yosemite guide.The "Scenes of Wonder and Curiosity in California" was first published in 1860 as the "... first book ... on the state's natural attractions and was the first works to describe the big trees and the Yosemite region in detail." (from Currey & Kruska). The text and illustrations were from the articles in the "Hutching's California Magazine". This Third edition expanded the text and illustrations with revised and updated travel information from the previous editions. (Inventory #: 13755)
$207.00 add to cart Available from
David Spilman Fine Books
Share this item