Encyclopedia of Exploration 1800 to 1850; A comprehensive reference guide to the history and literature of exploration, travel and colonization between the years 1800 and 1850 [Part 2 of series] [From Steve Fossett collection] 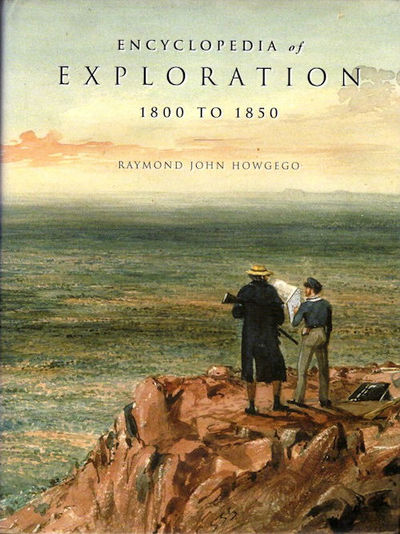 by Howgego, Raymond John
Potts Point NSW: Hordern House, 2004. First Edition. Fine/Fine. [11.25x8.5in]; xi [introduction], 690 pp.,732 articles with 4000 names of persons and ships, index of persons, index of ships; Gray green cloth covers with gilt lettering on front and spine, all edges trimmed, three gold page mark ribbons, light gray illustration of explorers looking at map on a promontory overlooking land on front and back end papers; Pictorial color illustration on dust jacket of Gill painting of Australian "Desert Interior" circa 1846 [also on end papers], black lettering on front and spine; Publisher prospectus tipped in. Raymond Howgego (1946- ) is an independent researcher, scholar and traveler. He has been researching the history of travel and exploration for much of his adult life. His first book in this series, Encyclopedia of Exploration To 1800, was issued in 2003 was the distillation of that research that took some fifteen years to complete. This book is the second in the series and cites more than 10,000 bibliographic references. This book, along with Part 1, is an extensive reference with primary and secondary bibliographical sources, for anyone interested in exploration.

Steve Fossett (1944-2007) was a successful commodities trader and an adventurer that set world records in balloons, sailboats, gliders and unique powered aircraft. In 2002, he was the first person to solo circumnavigate the world in a balloon, uninterrupted and unrefueled, and, in 2005, made a solo nonstop unrefueled flight around the world in the Virgin Atlantic Global Flyer sponsored by Richard Branson. In the 1980's Fossett began developing a library collection of books on adventure and exploration. He enlisted the services of an experienced bookseller to assist in building an over 2,000 volume collection focusing on significant and authoritative accounts of aeronautics, polar, Asia, Australasia, circumnavigation's, mountaineering and others. In September, 2007, Fossett disappeared on a solo flight in a light aircraft over the eastern Sierra Mountains along the California and Nevada border. After an extensive search, the wreckage was found by hikers a year later along the rugged Mt. Ritter range, about 10 miles east of Yosemite National Park. (Inventory #: 13719)
$168.00 add to cart Available from
David Spilman Fine Books
Share this item

Blue Jackets of 1812; A History of the Naval Battles of the Second War with Great Britain to which is prefixed an account of the French War of 1798

New York : Dodd, Mead and Company , 1887
(click for more details about Blue Jackets of 1812; A History of the Naval Battles of the Second War with Great Britain to which is prefixed an account of the French War of 1798)

History of the Sierra Nevada; [Designed by Lawton and Alfred Kennedy]

Berkeley, CA : University of California Press , 1965
(click for more details about History of the Sierra Nevada; [Designed by Lawton and Alfred Kennedy])
View all from this seller>