Six-Guns & Saddle Leather; A Bibliography of Books and Pamphlets on Western Outlaws and Gunmen [New Edition, Revised and Greatly Enlarged] 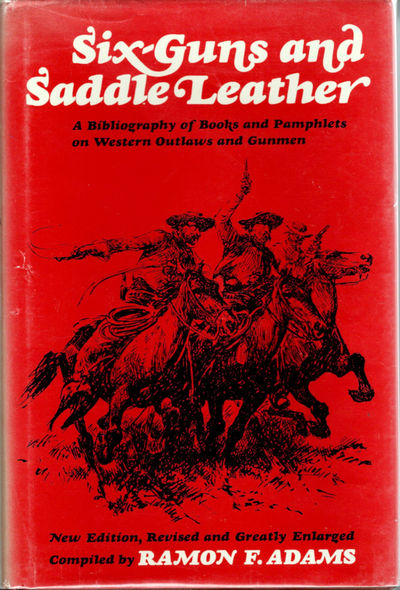 by Adams, Ramon F.
Norman, OK: University of Oklahoma Press, 1969. Second Edition. Near Fine/Very Good. [9.5x6.5in]; xxv, 808 pp., [1] colophon, index. Rust brown cloth covers with copper lettering on field of black on spine, top edge stained red ink, all edges trimmed, dark orange end papers; Minimal shelf wear to edges, corners, spine and covers; Red dust jacket with black and white lettering on spine and front, illustration of horses and cowboys on front, advertisements on back; Minor soiling to text block; Some fading of dust jacket to surfaces and spine, minor wear to edges and corners. One of the important bibliographies of western books that belongs in collector libraries. This book is an update of the 1954 edition with an increase in entries to 2,491. From the 1969 dust jacket, "With its initial appearance in 1954,Six Guns and Saddle Leather took its place as the authoritative reference source on writings about western outlaws. W. H. Hutchinson called it a "veritable Baedeker" to the Old West.From the 1954 dust jacket, "In no field are fact and legend more difficult to distinguish than in Western Americana , Ramon F. Adams has done much more in this book than provide a bibliography of materials concerning outlaws and gunmen. He has examined variant renderings of stories which have become classics of Western Americana, such as those about Billy the Kid, Joaquin Murieta, and Wild Bill Hickok. As a collector, he has unearthed rare and curious volumes; as a bibliographer, he gives valuable descriptions of 1,132 titles in first edition, to many of which he adds notes on subsequent reprintings. His principal contribution to the records of early pioneer days, however, are his annotations, which represent research in original sources and help to distinguish the often thin line in this field between fact and fancy. The entries are arranged alphabetically by authors, and there is a complete index of titles and subjects. The author is the first to admit that this list cannot be considered complete, and that it reflects both the highways and the byways in the bibliographical search for materials relevant to his subject. Some titles are included because of their status among collectors as rarities; many appear because of their great and reliable historical value; others have called forth the compiler's indignant astonishment that "so much false and garbled history could have found its way into print. (Inventory #: 13754)
$86.00 add to cart Available from
David Spilman Fine Books
Share this item