Death Valley in '49; Important Chapter of California Pioneer History. The autobiography of a pioneer, detailing his life from a humble home in the Green Mountains to the Gold Mines of California; and particularly reciting the sufferings of the band of men, women and children who gave "Death Valley" its name 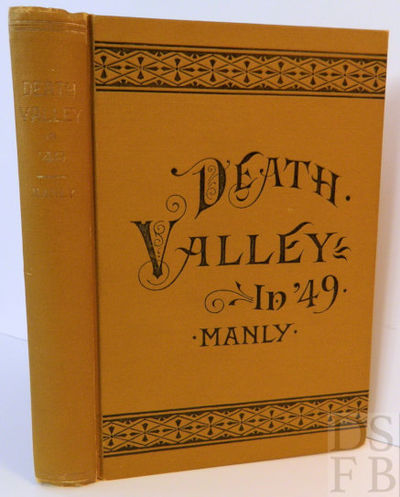 by Manly, William Lewis
San Jose: Pacific Tree & Vine, 1894. First Edition. Near Fine. [8x5.5in]; 498 pp., frontispiece portrait of Manly, three plates with half-toned illustrations, end of chapter illustrations; Dark mustard cloth covers with black stamped lettering and linear decorative bands on front, gilt lettering on spine, blind stamp lettering and decorations on back, all edges trimmed, floral end papers; Minor shelf wear to edges and corners, minor rubbing to spine top and bottom, small chip on rear bottom joint, offset shadow on front end papers and bookplate of Hope and Spencer Kingman on front paste down end paper. [Kurutz 427a, Wheat Gold Rush Books 136, Howell50 617, Cowan64 p.412, Zamorano80 #51]. William Lewis Manly (1820-1903) was one of the 49er's that followed Fremont's overland trail to Provo, UT, arriving in October, 1849. Due to the coming winter, several of the wagon trains chose the sketchy route to Southern California instead of over the Sierra Mountain passes, like the Donner party chose. Manly was part of the Bennett-Arcan train that missed the trail to San Bernardino was lost Death Valley. They were short on food and water and Manly with John Rogers, went ahead for help. It took nearly a month to reach a Rancho in the Santa Clarita Valley, north of Los Angeles. There they received supplies and returned to the wagon train to rescue all the members.

This book was initially written from Manly's diary as a long letter to his parents after returning from California to Wisconsin in 1851. Wintered in, the letter expanded into a book, and then, in the spring, packed it away and returned to California for more gold. The manuscript was later destroyed in a fire and the diary lost. Manly, disappointed at the loss and not wanting to relive the ordeal again, waited until the late 1880's to begin writing articles for the Santa Clara Valley, San Jose Pioneer and others. From these articles, the second book manuscript emerged. It was noted by reviewers, at the time, that the writing style, grammar and spelling, were different from the previous articles, likely from the publishers editor.

Death Valley in '49 presents in detail the conditions in the crossing of Death Valley and about Manly's life and adventures as a trapper, hunter, miner, and story teller. His early account of Los Angeles is detailed as well as his travels throughout California. This book is classic and important contribution to western Americana. (Inventory #: 13785)
$748.00 add to cart Available from
David Spilman Fine Books
Share this item

Blue Jackets of 1812; A History of the Naval Battles of the Second War with Great Britain to which is prefixed an account of the French War of 1798

New York : Dodd, Mead and Company , 1887
(click for more details about Blue Jackets of 1812; A History of the Naval Battles of the Second War with Great Britain to which is prefixed an account of the French War of 1798)

History of the Sierra Nevada; [Designed by Lawton and Alfred Kennedy]

Berkeley, CA : University of California Press , 1965
(click for more details about History of the Sierra Nevada; [Designed by Lawton and Alfred Kennedy])
View all from this seller>