The Atlantic to The Pacific.; What to See and How to See It [with and extensive review of Yosemite Valley] 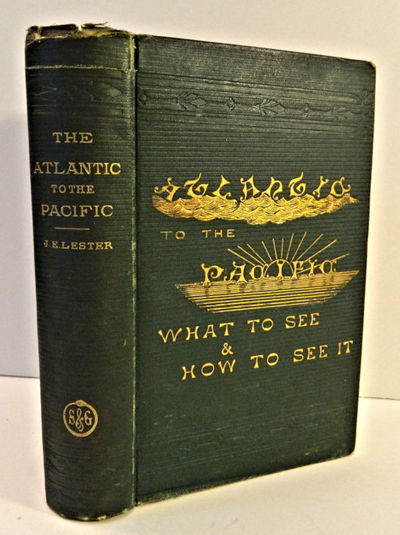 by Lester, John Erastus
Boston: Shepard and Gill, 1873. First Edition. Very Good. 8vo [7x4.75in]; 365 pp., [1] advertisement, Illustrated with folding map of Yo-Semite Valley as frontispiece, appendices, index; Original Forest Green cloth covers with gilt lettering on front and spine, front illustrative designs of ocean with blind stamped borders, top edge dyed brown, all edges trimmed, pale yellow end papers; Some shelf wear to edges and corners, rubbing to joint edges and top and bottom of slightly darken spine, small tears to top of spine, gilt illustration and letter bright, prior owner label on rear end paper. [Currey & Kruska 237 (US edition), Farquhar 13, Cowan64 p. 389]. John Erastus Lester (1840-1900) was a Providence lawyer and author of travel books and papers on the American West and Yosemite. His first book, "The Yo-semite; its history, its scenery, its development", was from a paper that "... was read before the Rhode Island Historical Society on December 17, 1872." (Farquhar). It was a small paperback that was privately published, in early 1873, at the request of friends. His more valuable contribution to Yosemite literature was this book from his trip to California in the Summer of 1872. The 1873 book, published in Boston and London, is a travel guide to rail travel from the Atlantic to the Pacific only a few years after the completion of the transcontinental railroad. The London edition includes many early illustrations of the Yosemite Valley, which are not in the Boston edition. In addition, it includes over 70 pages on the Yosemite Valley. (Inventory #: 13777)
$230.00 add to cart Available from
David Spilman Fine Books
Share this item