LEGENDS OF THE FALL. Uncorrected White Proof. One of Not More Than 15 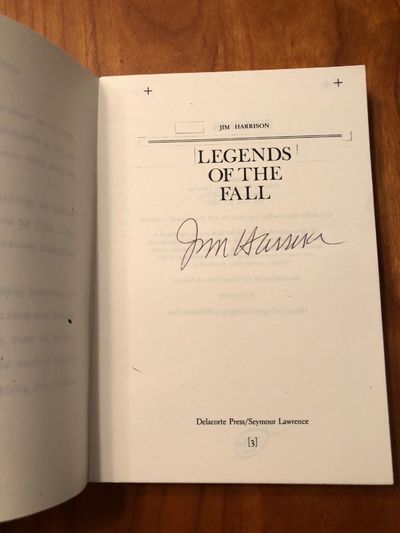 by Harrison, Jim
New York: Delacorte/Seymour Lawrence, 1979. First edition. Paperback. A near fine copy perfect bound in the original white wrappers, as issued. Signed by Jim Harrison on the title page. According to the Orr/Torrey Jim Harrison bibliography 1964-2008, this advance copy, A14.a. states, "This state of the proof, white pad-bound binding with black lettering. Cover of this proof is paper and is a photocopy of the title page. Total number of copies printed of this proof is unknown, but it is thought that very few were distributed (probably fewer than 15)". This book was the basis for the big screen film (1994) directed by Edward Zwick, starring Brad Pitt , Aidan Quinn, and Anthony Hopkins, from a screenplay by William D. Wittliff and Susan Shilliday. The film, like Jim Harrison's novella, is about three brothers and their father living in the wilderness and plains of Montana in the early 20th century and how their lives are affected by nature, history, war, and love. Oscar winner for Best Cinematography. Provenance on request. (Inventory #: 14431)
$5,000.00 add to cart or Buy Direct from Ed Smith Books
Share this item

CELEBRATE THE 20th ANNIVERSARY OF THE SUMMER OF LOVE. An A/P signed by the Big 5; Victor Moscoso, Rick Griffin, Alton Kelley, Wes Wilson, and Stanley Mouse


(click for more details about CELEBRATE THE 20th ANNIVERSARY OF THE SUMMER OF LOVE. An A/P signed by the Big 5; Victor Moscoso, Rick Griffin, Alton Kelley, Wes Wilson, and Stanley Mouse)

1987
(click for more details about ARTIST RIGHTS TODAY. An A/P Signed by the "BIG 5", Victor Moscoso, Rick Griffin, Alton Kelley, Wes Wilson, and Stanley Mouse. 1987)
View all from this seller>