The Scarlet Letter: A Romance 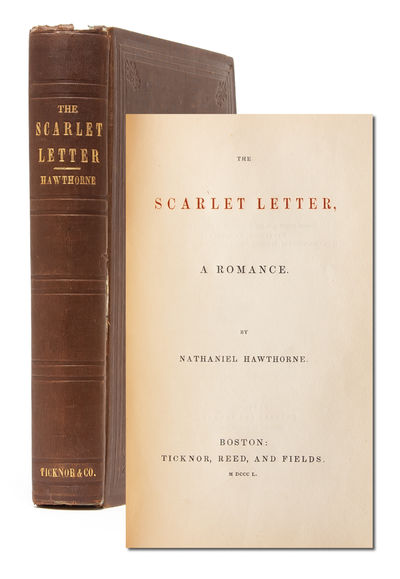 by Hawthorne, Nathaniel
Boston: Ticknor, Reed, and Fields, 1851. First edition. Near Fine. Original publisher's cloth binding stamped in gilt and blind. An exceptional copy of this American masterpiece, in just about Fine condition. Spine ends gently chipped and small bump to lower front corner; front hinge a bit tender but holding strong. Internally some light scattered foxing to preliminaries, else clean and unmarked. Housed in a custom silk slip case. Hester Prynne, publicly punished as an adulterer when she bears a child out of wedlock, refuses to name the father of her daughter; instead, she lives life in her village, wearing a mandatory scarlet A as a sign of her shame. Though Hester's body betrays her secret, in pregnancy and motherhood, her honesty and public acknowledgement of her daughter brings her greater redemption than the two men in her life. For years, the Reverend Dimmesdale struggles in secret with his guilt at allowing Hester to bear punishment alone for their affair. And her cruel, estranged husband (alias Roger Chillingworth) becomes morally bankrupt in his desperate search to uncover and name her lover, the unknown father of Pearl. A classic of American literature. Near Fine. (Inventory #: 3440)
$8,500.00 add to cart or Buy Direct from
Whitmore Rare Books
Share this item