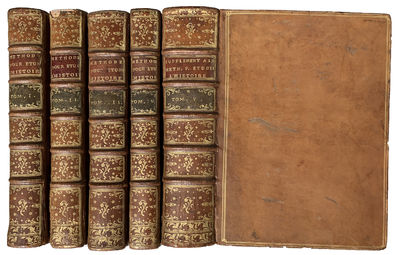 by FRESNOY, Nicolas Lenglet du.
Paris:: Pierre Gandouin, 1734, 1729-1741., 1734. Mixed issues. Seven parts in five [volumes]. 4to. xvii, [3], 496, xix-xxii; [6], 498; [12], 128, 428; [6], 452; xvi, 588, viii, 279, [1] pp. 23 engraved folding map plates, decorated head- and tail-pieces and initials, indexes. Contemporary gilt-ruled calf, five raised bands, ornamental gilt compartments and titles, gilt dentelles, all edges red, marbled endpapers; rubbed and scuffed, minor surface leather loss at edges, few small holes in joints, some joints starting; volume one with holograph pencil annotations on verso of rear free endpaper and recto of front fly-leaf; volume III, pt. II, pages 155-156 both in photo-facsimile (bound in); foxing and some page browning, light image off-set on plates and facing pages, occasional soiling; else in very good condition. New edition. With this set volume I is issued in 1734, II = 1735, III = 1729, IV = 1735, V = 1741. Valuable and comprehensive work of ancient and modern history, and of secrets and the obscure of every nation. The author is trying to establish and systematize a method of recording human history. He opens his first chapter with a vignette of the Tower of Babel. The narrative then opens with an outline of his method for history: plan, dispersion of people, the formation and succession of Empires. Numerous historical maps illustrate the account. These include: Western Europe, Egypt, Palestine, Persia, Xerxes/Persia to Greece, Greece, Alexandrian Empire, Greek Islands, Italy in the Roman Empire, German Empire, France, Britain, Spain, modern Italy, Scandinavia, (modern) Poland, Africa, India, North America (shown with ZERO information regarding the Pacific northwest ("Californie" is shown in rough outline in the southern section), South America. The extensive "catalogue" is a bibliographic tour-de-force of all known books relating to the world's history, as recorded by the author's work. Nicolas Lenglet Du Fresnoy, also Abbe Lenglet du Fresnoy (1674-1755) was a French historian, geographer, philosopher, publisher and encyclopaedist. He became the librarian to Prince Eugene of Savoy. Brunei 111:976; Petzholdt 816-817. [EXTRA POSTAGE WILL APPLY]. (Inventory #: LLV2305)
$950.00 add to cart Available from
Jeff Weber Rare Books
Share this item

The Drama of Life After Death: A Study of the Spiritualist Religion.

New York: : Henry Holt, 1932. , 1932
(click for more details about The Drama of Life After Death: A Study of the Spiritualist Religion.)
View all from this seller>