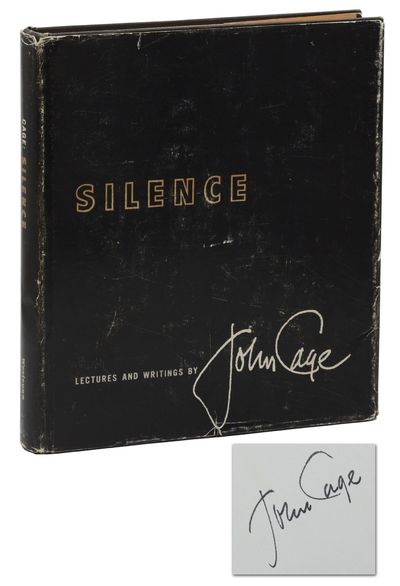 by Cage, John
Middletown, CT: Wesleyan University Press, 1961. First Edition. Near Fine/Very Good. First edition. Signed by John Cage on verso of front free endpaper. The copy of Ihab Hassan with his signature, as well, to paste down. His marginal brackets and checks occasionally throughout text; a list of his notes with corresponding page numbers is written on rear free endpaper, these notes could be of historical significance. xii, 276 pp. Original cloth. Near Fine in Very Good, slightly rubbed unclipped dust jacket.

A great association between two key figures in the aesthetic turn from modernism towards postmodernism-- prolific writer and academic Hassan would in fact coin the term "postmodernism" in a 1971 paper on literature. Composer John Cage and his writings have been widely cited as a "source for postmodern aesthetics" as Nancy Perloff put it; "The Cagian tension between the written score and the variable performance, the resulting paradox that the score is autonomous, without fixed referent, the treatment of composition as process, the expansion of the possibility for multiple signifiers and critical receptions - such ideas propelled the avant-garde to new terrain," i.e. beyond modernism. (Inventory #: 140939746)
$1,500.00 add to cart or Buy Direct from
Burnside Rare Books
Share this item
Burnside Rare Books
Offered by

New York : Alfred A. Knopf , 1942
(click for more details about The High Window)
View all from this seller>