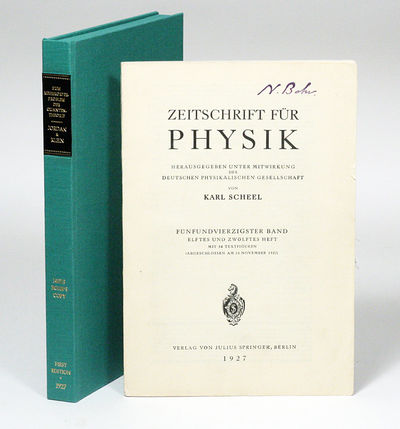 by JORDAN, PASCUAL; KLEIN, OSKAR
Berlin: Julius Springer, 1927. First edition. Original wrappers. Fine. FIRST EDITION IN ORIGINAL WRAPPERS of Jordan and Klein's introduction of the "second quantization"; one of the founding papers of quantum field theory. FROM THE LIBRARY OF NIELS BOHR, with his stamp on the front wrapper. In Jordan's "paper with Klein, written while the two of them were in Copenhagen in the spring of 1927, a generalization of Dirac's treatment of bosons was given to allow for the interaction of the bosons with one another. Their point of departure was a Schrödinger equation for the field operator containing a nonlinear term to account for the interaction of the field itself... "The equivalence of this description with that using symmetric wave functions in configuration space was established. The 'particles' that emerged from the imposition of the quantum condition (commutation rules) on the field variables thus obeyed Bose statistics. Heisenberg found the results of Jordan and Klein very attractive. In his interview with Kuhn and Heilbron in 1963, he recalled: 'I like[d it] very much because now I could see, "All right. There is an entirely different picture to start with (the wave picture), and if I quantize that picture--that is if I make this picture open to the same restriction as the particle picture--then the two pictures become equivalent." That is exactly what I wanted' (Heisenberg 1963, session 8, p. 21). "Bohr at the Solvay meeting of 1927 saw Jordan and Klein's work as supporting his views of complementarity. Pauli at that same congress welcomed the formulation since it allowed to formulate the quantum theoretic description of an assembly of bosons entirely in 3-dimensional space... "In a letter to Kronig in November 1927, Pauli described the work of Jordan and Klein as 'wirklich schön' (really beautiful)... In fact, the Jordan and Klein paper converted Pauli to the Jordan viewpoint about the quantization of matter fields. The article by Jordan and Klein made clear to both Heisenberg and Pauli, who were then collaborating on a general theory of relativistic quantized fields, how to proceed in describing the interaction between the electromagnetic field and charges. Pauli, who up to that time had been reluctant to accept Jordan's views on quantization of matter fields, embraced Jordan's viewpoint. After the publication of the Jordan-Klein article, Pauli and Heisenberg agreed that the quantization of matter fields was the correct approach. In December 1927 Heisenberg could write Bohr that the important work of Jordan and Klein had been the stimulus of his thinking long and hard on the formulation of relativistic quantum mechanics and that he and Pauli were making good progress" (Schweber, QED and the Men Who Made It: Dyson, Feynman, Schwinger, and Tomonaga, pp.35-37). Also included is Jordan's paper: Über Wellen und Korpuskeln in der Quanenmechanik (pp. 766-775). Provenance: From the library of Niels Bohr, with his stamp on the front wrapper. IN: Zeitschrift Für Physik, Band 45, 18 November 1927, pp. 751-765. Berlin: Julius Springer, 1927. Octavo, original wrappers; custom box. A touch of edgewear. A FINE COPY, rare in original wrappers. (Inventory #: 2348)
$3,900.00 add to cart or Buy Direct from
Manhattan Rare Book Company
Share this item