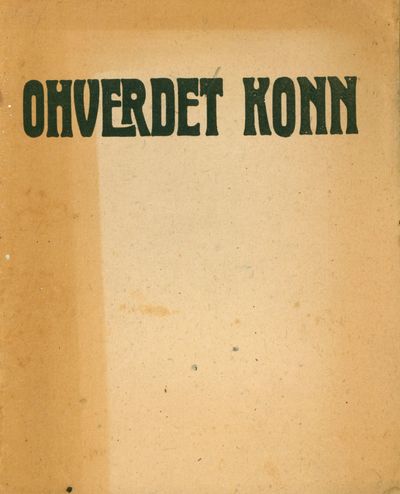 by Hiir, Erni and Albert Kivikas
Tartu: Odamees, 1919. Quarto (22 Ã— 17.5 cm). Original staple-stitched decorative wrappers; 8 pp. Sun-tanning to front wrapper; else a very good copy of a rather fragile title. One of the few true Futurist books to be published in Estonia, a joint effort by Erni Hiir (1900-1989) and Albert Kivikas (1898-1978), this being the latter's first book publication. "The sacrificed frog" contains three poems by Hiir as well as three prose poems by Kivikas ("Office," "Symphony," and "Automobile"). Hiir's poems show the influence of Dada and, possibly, Russian "zaum'" (or trans-rational language, as practiced by Kruchenykh and Khlebnikov). These texts consist largely of invented words and evocatively textured sounds, with only a few actual Estonian words added. Kivikas' contributions reveal the influence of Futurism in his own way, both in their attention to contemporary technological civilization and in their violation of bourgeois notions of literary writing. Later the same year, Kivikas would produce the ground-breaking and somewhat legendary "Lendavad sead" (Flying pigs), printed on unused labels of a beer brewery. He published two other titles before reverting to a more traditional, neo-realist style. With a simple, yet appealing typographic linocut cover on thick paper stock, possibly by Ado Vabbe or another modernist artist active in Tartu at the time. Rare. As of April 2020, KVK, OCLC show a single copy, at Helsinki University. (Inventory #: 50686)
$950.00 add to cart or Buy Direct from
Bernett Penka Rare Books
Share this item