The Life and Times of William Harris Crawford, of Georgia 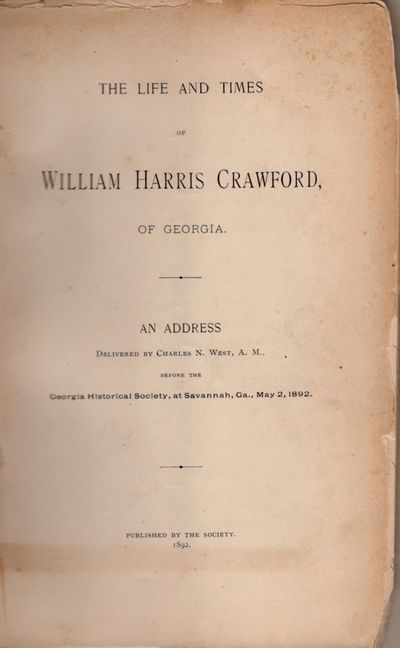 After living in Virginia and South Carolina, the Crawford family moved to Georgia, where William attended Moses Waddel's Carmel Academy. He then taught school in Augusta, studied law, and in 1799 opened a law practice in Lexington, Ga. A Jeffersonian Republican, he entered elective politics in 1803, winning a seat in the Georgia legislature. In 1807 he went to Washington to fill the unexpired term of Georgia's deceased U.S. senator Abraham Baldwin. In the Senate, Crawford quickly earned a reputation for wisdom and sound judgment, and the Georgia legislature elected him to a full term as senator in 1811. Crawford backed U.S. preparations for and the declaration of war against Britain in 1812 and—unlike most Democratic Republicans—favoured a tariff and extension of the charter of the Bank of the United States. When Vice President George Clinton died in 1812, Crawford was elected president pro tempore of the Senate (which his predecessor, Baldwin, had been) but left the position the following year to become minister to France.

In 1815 President James Madison appointed Crawford secretary of war and a year later named him secretary of the treasury, a position in which, from 1816 to 1825, Crawford's abilities were best utilized. A leading candidate for the presidential nomination in 1816, Crawford deferred to James Monroe, who was elected and who retained Crawford as secretary of the treasury. Monroe was reelected virtually without opposition in 1820. In 1824 Crawford was again a presidential prospect, along with John Quincy Adams, Henry Clay, and Andrew Jackson. (Inventory #: 19202)
$100.00 add to cart or Buy Direct from Americana Books
Share this item

Occoquan, VA : Self published. Press of Knapp, Peck & Thomson Auburn, N. Y. , 1904
(click for more details about A Brief Genealogical History of Robert Starkweather of Roxbury and Ipswich, Massachusetts Who Was The Original American Ancestor of All Those Bearing the Name of Starkweather and of his Son John Starkweather of Ipswich, Mass, and Preston, Conn. And of His Descendants in Various Lines 1640-1898)
View all from this seller>