A Philosophical Discourse, Addressed to the American Academy of Arts and Sciences . . . On the Eighth of November Mdcclxxx 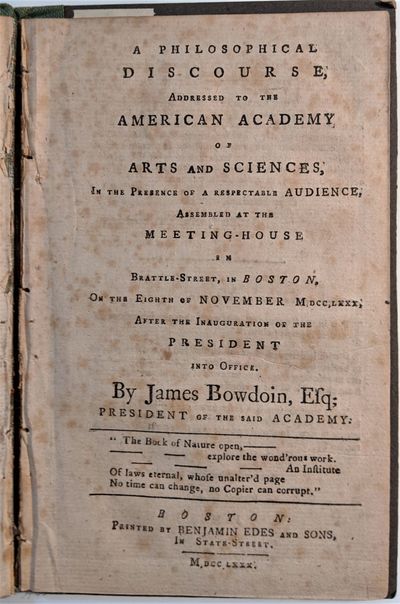 by Bowdoin, James
Boston: Printed by Benjamin Edes and Sons, 1780. Small 4to. 185 x 120 mm., [7 ¼ x 4 ½ inches]. 35 pp., including half-title. Old library pamphlet binder. Marked "Withdrawn Bowdoin College Library" pencil mark "Dup" on paper label. First edition. The American Academy of Arts and Sciences was founded in Boston in 1780 during one of the most difficult years of the American Revolution. James Bowdoin was the first president and other founders were John Adams and John Hancock. It is the oldest society of its kind in America and was organized to foster the development of a new nation in the liberal arts, commerce, agriculture, science, and technology. Bowdoin's speech begins with a recitation on the history of nations and their development from classical time to the modern nation states of Europe. He continues by arguing that the United States of America is advancing civilization in a new hemisphere with a new governmental structure created for the well-being of its citizens and prosperity of its people. In keeping with the scholarly nature of the Academy, the final four pages of pamphlet are devoted to the discovery in a quarry in New Hampshire of a valuable stone called "lapis specularis". The natural characteristics of the stone is the thin and transparent plate layer that can be cut and can become a substitute for window glass. "Includes a discussion of newly discovered deposits of talc, and its uses" (Rink). Evans, American Bibliography, Vol. VI, 16720. Sabin, Dictionary of Books Relating to America, 7016. Rink, Technical Americana, 3478. (Inventory #: 480)
$300.00 add to cart or Buy Direct from
De Simone Company
Share this item
De Simone Company, Booksellers
Offered by

Manuscript on paper in English, in ink, and highly legible. Illustrated with mathematical diagrams and 14 illustrations on perspective

[Cambridge ?] 1800
(click for more details about Manuscript on paper in English, in ink, and highly legible. Illustrated with mathematical diagrams and 14 illustrations on perspective)

Paint & Colour Mixing. A practical handbook for Painters, Decorators, and all who have to mix colours. Containing 72 samples of paint of various colours, including the principal graining grounds, and upward of 400 different colour mixtures. .

London & New York : E. & F. Spon, Ltd. & Spon & Chamberlain , 1902
(click for more details about Paint & Colour Mixing. A practical handbook for Painters, Decorators, and all who have to mix colours. Containing 72 samples of paint of various colours, including the principal graining grounds, and upward of 400 different colour mixtures. .)
View all from this seller>