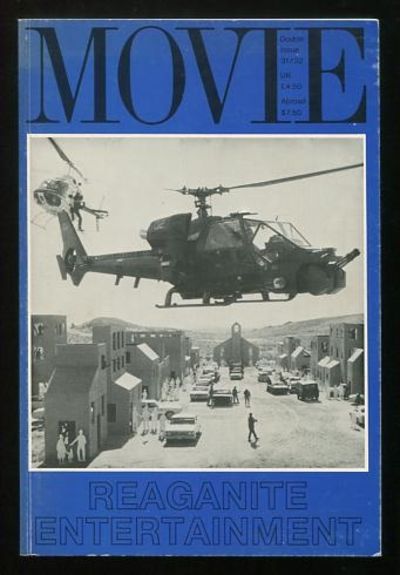 by (Cameron, Ian, publisher)
London: Movie. Very Good+. 1986. (Issue 31/32). Hardcover. [light edgewear to covers, otherwise a nice clean copy]. (B&W photographs) This issue of this well-regarded British journal of film criticism opens up with an long essay (nearly one-third of the issue's 128 pages) entitled "Blissing Out: The Politics of Reaganite Entertainment," defined as "a general movement of reaction and conservative reassurance in the contemporary Hollywood cinema," with much focus on the resurgence of science fiction films in the wake of STAR WARS and comic-book movies in the wake of SUPERMAN. Also: "The Economics of Independence: Roger Corman and New World Pictures 1970-80"; an article about the production company BBS (formed by Bert Schneider, Bob Rafelson, and Steve Blauner); "EASY RIDER and Hollywood in the '70s"; "HEAVEN'S GATE Reopened," by Robin Wood, one of the publication's longtime contributing editors; "U.S. Film Industry: Economic Background, Part Two"; several analyses of the films of Martin Scorsese, including two articles specifically about NEW YORK, NEW YORK, and one about the homosexual subtext of RAGING BULL; and an interview with writer/director Larry Cohen, along with a critical analysis of his film IT'S ALIVE. One thing about this publication is that you get your money's worth: there are no ads or other clutter, the photographs don't take up an excessive amount of the space, and the articles themselves are detailed and thoughtful (albeit very academic). (We have numerous other issues of this and other film-related periodicals that are not listed online; please inquire if you have particular needs or wants.) . (Inventory #: 25378)
$50.00 add to cart Available from ReadInk
Share this item
ReadInk
Offered by