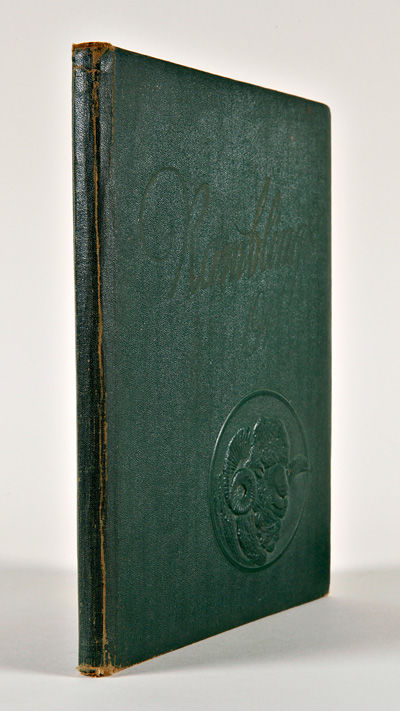 by [Japanese Internment Camp Yearbook]: [Akinaga, Kenji]
Topaz, Ut.: Published by the '44 Ramblings Staff of the Associated Students of Topaz High School, 1944. 122,[6]pp. Profusely illustrated. Quarto. Original blind-embossed green leatherette over padded boards. Spine ends and corners worn, light soiling to boards. Binding a bit shaken, front hinge cracking (but holding). Ink ownership signatures of Kenji Akinaga on front pastedown. Minor foxing, some staining. Very good. The second yearbook for the students of Topaz High School inside the Topaz Relocation Center in Utah. A total of three yearbooks were produced for Topaz High School during its short run as the main educational institution inside the internment camp, and this is the middle one. As with other internment camp school yearbooks, it looks much like any other high school yearbook from the 1940s, profusely illustrated with photographs of students, faculty, and staff. The front cover and most text leaves include a small circular illustration of a ram, the Topaz High School mascot. Located in central Utah, the Topaz Relocation Center (also known as the Central Utah Relocation Center) was a 19,800-acre concentration camp operated from September 1942 to October 1945, one of dozens of camps at which Japanese Americans, both American citizens and resident "aliens," were interned during World War II. In accordance with President Roosevelt's Executive Order 9066, all persons of Japanese ancestry were excluded from the west coast of the U.S., even though intelligence reports at the time found no evidence of fifth column activity among Japanese Americans (or Japanese immigrants) and advised against mass incarceration. At its height, Topaz housed over 9,000 Japanese Americans, most from the San Francisco Bay Area. Each internment camp had its own schools and most produced yearbooks, as any American school would. Most of the students here list Bay Area cities as home, including San Francisco, San Mateo, Alameda, San Jose, Berkeley, and Oakland, but also include students from other locations in California, such as Los Angeles and Sacramento, as well as students hailing from Washington, Oregon, and Utah. Belonging to Kenji Akinaga, this yearbook contains everything one would expect: individual photos for the seniors, group photos for the other classes; photos of class officers, faculty, clubs, committees, sports teams, community service programs, and other activities. Akinaga has inscribed the front pastedown twice. The yearbook also makes clear that many of the faculty and staff of Topaz High School were Japanese Americans. They are listed on the faculty page as "Resident Faculty" below a listing of the Anglo-American faculty designated as "Appointed Faculty." The yearbook highlights the efforts of Japanese-American students and their teachers to maintain some semblance of normalcy during what must have been a terrifying and humiliating time. This yearbook contains the first winter-term graduation class from Topaz High School, numbering fifty-two students, as well as junior high students. According to internment records, Kenji Akinaga was born in Hawaii in 1922. He does not appear in the current yearbook, nor in the yearbook from the previous year. The 1943 RAMBLINGS shows a Marian Akinaga as part of the Language Club. Since she is not listed individually in the class pictures, she was likely an underclassman. Perhaps Kenji and Marian Akinaga were siblings, since Kenji would have already graduated high school before coming to Topaz. Echoing the optimism and loyalty many Japanese-Americans still felt despite their treatment during the internment period, the foreword to the yearbook reads as follows: "As we, the students of Topaz High School, look back into our past a certain feeling of pride warms our hearts. We have grown both in scholastic and athletic standing from a small unknown school into a thriving, famous institution. We can look back with pride to our acceptance into the Utah state educational system, and our advancement in the athletic field. We have gone over many difficult hurdles and the obstacles that still stand in our path should act as a challenge to all our ingenuity and courage. This book stands as a record for all the hurdles that we have successfully cleared, and the remaining obstacles will give the students a goal for which to strive. The world today and the world before us will not be easy. With this in mind, we will guide our school life by the theme of our book, READY FOR TOMORROW." OCLC only records one physical copy of this yearbook, at the University of Utah, but others might be incorrectly reported under a digital copy listing eleven institutions. There are also a copies at Yale and Utah State. In any case, a rare surviving record of the impact of internment on Japanese- American youth during World War II. OCLC 39205205. (Inventory #: WRCAM55458)
$3,000.00 add to cart or Buy Direct from
William Reese Co. - Americana
Share this item