No. 464 MISCELLANEOUS SERIES. DIPLOMATIC AND CONSULAR REPORTS. UNITED STATES. REPORT ON THE IMPROVEMENT OF THE ENTRANCE TO GALVESTON HARBOUR AND THE COMMERCIAL RESULTS THEREFROM 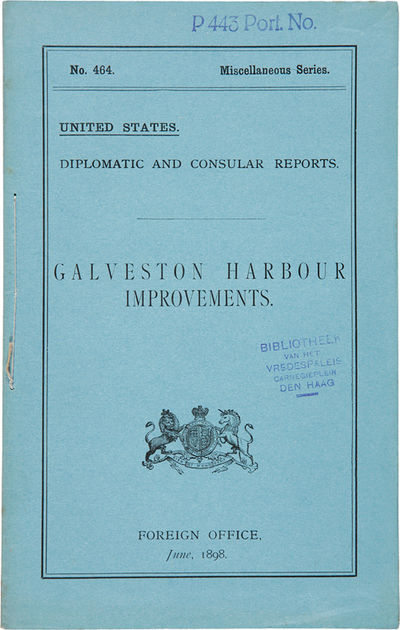 by [Texas]
London: Printed for Her Majesty's Stationery Office, by Harrison and Sons, 1898. 19,[1]pp. plus two folding maps. Original printed blue wrappers, stitched as issued. Two small unobtrusive stamps to front cover, else bright and near fine. An uncommon report by the British Foreign Office amounting to a history of Galveston Bay on the Gulf Coast of Texas, including statistics and a description of the current state of the harbor after several stages of improvements over two decades by the Army Corps of Engineers. The text is a very detailed account of the work down around Galveston Island - including dredging and building stone jetties - as well as the costs involved, and also discusses the potential advantages to Texas in terms of increased trade, and the disadvantages that might be suffered by New Orleans. The two folding maps are entitled "Outline Map of United States Showing Comparative Position of Galveston" and "Galveston, Texas. Map Showing Harbour Lines, Jetties & Channel." The latter is more detailed, informative, and useful for planning shipping movements around the island. All of the information in this pamphlet is particularly interesting for its depiction of Galveston just two years before the devastating hurricane of 1900, after which the south Texas island was never the same. OCLC records just a single copy, at SMU's DeGolyer Library. (Inventory #: WRCAM55323)
$375.00 add to cart or Buy Direct from
William Reese Co. - Americana
Share this item