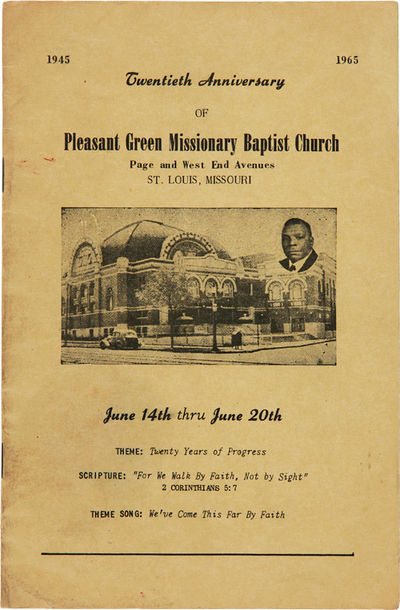 by [Missouri]: [African Americana]
[St. Louis: Amenophis IV College Press, 1965. [8]pp. Original pictorial yellow wrappers. Mild soiling, minor edge wear, old stain on front wrapper. Internally clean and bright. Very good. An apparently unrecorded program for the twentieth anniversary celebration of the Pleasant Green Missionary Baptist Church in St. Louis in June 1965. The cover has an inset image of the church and presumably its pastor, Rev. George H. Pruitt. The theme of the celebration is noted as "Twenty Years of Progress." The text provides a detailed history of the church since its founding in 1945, including a page recapping its participation in the civil rights struggle. The remainder of the text lays out the program for the week's anniversary proceedings, including devotions, scripture readings, sermons, invocations, choir performances, and more. The last page of the program lists a felicitation performed by Rev. P.J. Taylor of Ebenezer Baptist Church, though this is Ebenezer Missionary Baptist Church in Kansas City, not Martin Luther King's church in Atlanta. The inside rear wrapper lists the church officers and committees. The imprint is worth noting - "Amenophis IV" is a name associated with the Egyptian Pharaoh Akhenaten. In the mid-20th century there was some currency given to the thesis that ancient Egypt was a primarily black civilization. A very rare and perhaps unique copy of an ephemeral item - an anniversary celebration of an African-American church during the heart of the civil rights struggle. No copies in OCLC. (Inventory #: WRCAM55454)
$200.00 add to cart or Buy Direct from
William Reese Co. - Americana
Share this item