THE BYAKU RENGE. IN COMMEMORATION OF THE TENTH YEAR 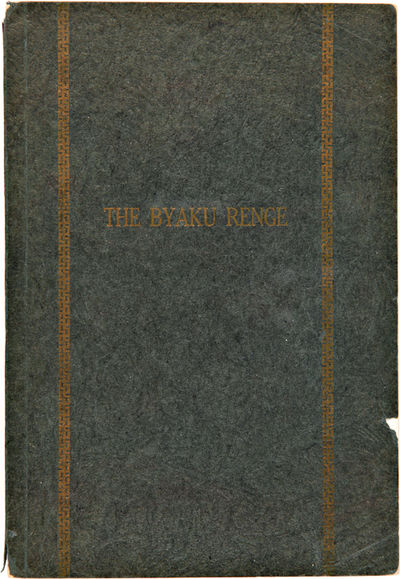 by [Japanese-American Women]: [California]
[Fresno]: Central California Y.W.B.A. League, 1936. [184]pp., in English and Japanese. Profusely illustrated. Original printed gray wrappers, with gilt titles within two vertical lines of swastikas. Small chip in foredge of front wrapper, chipped at spine ends. The stated "second issue" of a periodical and directory for the Central California Young Women's Buddhist Association League, which the editor's note describes as a "magazine." The "Forward" [sic] states the purpose of the book as "an attempt to retrace the activities of the League during the past decade" and an "honest effort to record in word and in picture the life and activity of the League." The book is dedicated to Rev. E. Shigefuji and to the "growth and spread of religious consciousness among the forthcoming generation of Japanese-American." The work includes a timeline of the group's activities over the past decade; photographs of the cabinet members of the League; the agenda of the tenth anniversary celebration to take place on March 8, 1936; pictures of the staff members of the magazine; a section on the various Y.W.B.A. organizations throughout California and their activities, some with group photographs; a section of literary offerings, some celebrating Buddhism; and a short chapter reporting on the sporting activities of the Y.W.B.A. Following the sports report is a lengthy classified section with advertisements for a variety of businesses across California, mainly for Fresno markets, restaurants, and general merchandisers. The advertisements also include a smattering of businesses outside Fresno, such as Omata's Market in Hanford, the Sunshine Hardware Co. in Bakersfield, Furuhashi General Merchandise in Kingsburg, and others. This section is interspersed with three photocollages of Y.W.B.A. members. The last section in the work of forty-four pages is printed entirely in Japanese. An interesting work, showing an active and supportive community of Japanese-American Buddhist women in California during the Great Depression. Also an especially important work in light of the aim stated in the dedication, and considering the religious turmoil that would result in the Japanese- American community from the Americanization (i.e., the Christianizing) of people of Japanese ancestry during the internment period that would come just six years later. OCLC records two copies of a thirty-two-page edition of this work, at the Fresno County Free Library and Project Asia. Those are likely the first issue of this work, of which the present, greatly expanded copy, is the second issue. We can locate no other copies this second issue. OCLC 20344473 (ref). (Inventory #: WRCAM55461)
$1750.00 add to cart or Buy Direct from
William Reese Co. - Americana
Share this item