[AUTOGRAPH LETTER, SIGNED, FROM JAMES FORD TONG, ONE OF STEPHEN F. AUSTIN'S "OLD THREE HUNDRED" SETTLERS, TO HIS FRIEND ABRAHAM NEWFIELD IN JACKSON, MISSOURI, DESCRIBING LIFE IN TEXAS THE YEAR BEFORE HE WAS GRANTED LAND IN AUSTIN'S COLONY] 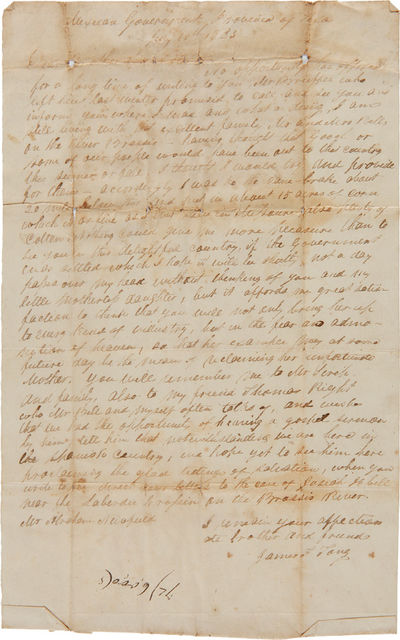 by Tong, James Ford
Mexican Government Province of Texas., 1823. [1]p., on a single folio sheet. Original mailing folds. Addressed in manuscript on verso. A few minor fold separations, light foxing. Withal, very good condition. A rare manuscript correspondence from an early Texas settler, James Ford Tong, one of the first and original "Old Three Hundred" granted land by Mexico as part of Stephen F. Austin's colonization of Texas. It is the earliest letter from an American settler in Texas that we have handled. James Ford Tong was born in Prince George's County, Maryland on March 8 1783, and died in Clarksville in the Austin Colony on or before October 24, 1829. During his life, Tong lived in Kentucky and Missouri where he was a partner in a blast furnace on Stout's Creek in Ralls County, Mo., and later operated a grist mill on Spring Creek at St. Genevieve in 1823. Later that same year, Tong emigrated to Texas. The HANDBOOK OF TEXAS states that Tong "was in Texas as early as November 1823." From the present letter - the earliest known from Tong after arriving in Texas - we know he was there at least four months earlier. Here, Tong writes to his friend, Abraham Newfield and his wife about his present activities in Texas, missing his daughter back in Missouri, and the prospect of more friends emigrating to Texas, with whom he might share his religion. The letter reads, in full: "No opportunity has offered for a long time of writing to you. Mr. Broffee[?] who left here last winter promised to call and see you and inform you where I was and what a doing. I am still living with that excellent family Mr. and Mrs. Bell on the River Brassis [i.e. Brazos] - having thought that Gooch or some of our people would have been out to this country this summer or fall. I thought I would try and provide for them. Accordingly I was to the cane-brake about 20 miles below this and put in about 15 acres of corn which is as fine as I ever saw in Missouri, also plenty of cotton. Nothing could give me more pleasure than to see you in this delightful country, if the Government was settled which I hope it will be shortly. Not a day passes over my head without thinking of you and my little motherless daughter, but it affords me great satisfaction to think that you will not only bring her up to every kind of industry, but in the fear and admonishing of heaven, so that her example may at some future day be the means of reclaiming her unfortunate mother. You will remember me to Mr. Screte[?] and family. Also to my friend Thomas Right who Mr. Bell and myself often talks of. And wish that we had the opportunity of having a gospel sermon by him. Tell him that notwithstanding we are here in the Spanish country, we hope yet to have him here proclaiming the glad tidings of salvation. When you write to me direct your letters to the care of Josiah H Bell near the Labardee [i.e. La Bahia] Crossing on the Brassis [Brazos] River. I remain your affectionate brother and friend James F. Tong." Just over a year after writing this letter, on August 19, 1824, Tong was awarded a sitio of land in present-day Brazoria County. He was also appointed a corporal in the colonial Texas militia that summer. In the 1826 census, Tong is classified as a carpenter and a widower aged between forty and fifty. We know from the present letter that his wife was dead sometime before July 1823, as he speaks of his "motherless daughter." Tong also mentions two important early cash crops in Texas - corn and cotton. The latter was especially dependent on slave labor, which was prevalent in Texas at this time and until Emancipation. Also from the text of his letter, Tong's phonetic misspellings of the Brazos River and the La Bahia crossing near Washington-on-the-Brazos are an interesting linguistic study in how the American ear met and interpreted the Spanish-influenced tongue of the Mexican people he met in Texas. Tong's letter contains a few references to his friend and business associate in Texas, Josiah Hughes Bell (1791-1838), with whom he was living. Josiah Bell was also one of Austin's "Old Three Hundred" colonists, and a most prominent figure in early Texas history. He moved with Austin and a family of slaves to Texas in 1821, settling on New Year Creek, near old Washington-on-the-Brazos. He served as a lieutenant in the colonial militia, and when Austin was in Mexico from 1822 until August of 1823, Bell took charge of the colony as alcalde. After establishing a sugar plantation along eponymous Bell's Creek, he planned and founded East and West Columbia, Texas, where he operated a hotel and built a school. The fact that Tong was residing in Bell's house speaks well of his place within the Austin colony in its early days. A remarkable, early Texas letter from an original Austin colonist. HANDBOOK OF TEXAS (online). Lester G. Bugbee, "The Old Three Hundred. A List of Settlers in Austin's First Colony" in TEXAS HISTORICAL ASSOCIATION QUARTERLY, Vol. 1, No. 2 (October 1897), pp.108-17. (Inventory #: WRCAM55329)
$4,250.00 add to cart or Buy Direct from
William Reese Co. - Americana
Share this item