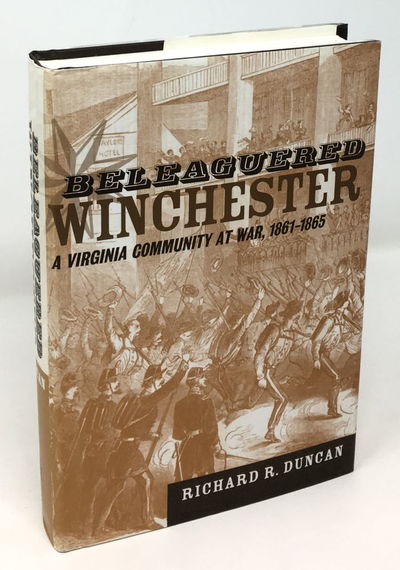 by Duncan, Richard R.
Hardcover with dust jacket, brown cloth with copper spine titles, 16 by 23.5 cm, xix 380 pp. Very good with only minor signs of wear and an erased name on the rear free endpaper. From the publisher: "During the Civil War, the strategically located town of Winchester, Virginia, suffered from the constant turmoil of military campaigning perhaps more than any other town. Occupied dozens of times by alternating Union and Confederate forces, Winchester suffered through three major battles, including some seventy smaller skirmishes. In his voluminous community study of the town over the course of four tumultuous years, Richard R. Duncan shows that in many ways Winchester's history provides a paradigm of the changing nature of the war. Indeed, Duncan reveals how the town offers a microcosm of the war: slavery collapsed, women assumed control in the absence of men, and civilians vied for authority alongside an assortment of revolving military commanders. Control over Winchester was vital for both the North and the South. Confederates used it as a base to strike the Baltimore and Ohio Railroad and conduct raids into western Maryland and Pennsylvania, and when Federal forces occupied the town, they threatened Staunton -- Lee's breadbasket -- and the Virginia Central Railroad. At various times during the war, generals 'Stonewall' Jackson, Nathaniel Banks, Robert Milroy, Richard Ewell, Jubal Early, and Philip Sheridan each controlled the town. Guerrilla activity further compounded the region's strife as insecurity became the norm for its civilian population. In this first scholarly treatment of occupied Winchester, Duncan has compiled a narrative of voices from the entire community, including those of groups often omitted from such studies, such as slaves, women, and Confederate dissenters. He shows how Federal occupation meant an early end to slavery in Winchester and how the paucity of men left women to serve as the major cohesive force in the community, making them a bulwark of Confederate support. He also explores the tensions between civilians and military personnel that inevitably arose as each group sought to protect its interests. The war, Duncan explains, left Winchester a landscape of wreckage and economic loss. A fascinating case study of civilian survival amid the turmoil of war, Beleaguered Winchester will appeal to Civil War scholars and enthusiasts alike." (Inventory #: 3508)
$20.00 add to cart Available from Bay Leaf Books
Share this item