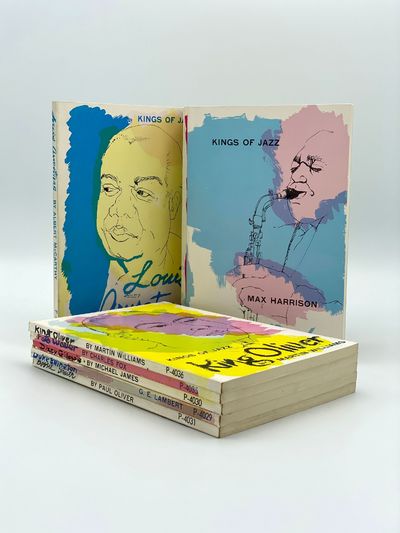 by ARMSTRONG, Louis; Bix BEIDERBECKE; Miles DAVIS; Johnny DODDS; Duke ELLINGTON; Dizzy GILLESPIE; Jelly Roll MORTON; King OLIVER; Charlie PARKER; Bessie SMITH; Fats WALLER
New York: A.S. Barnes for Perpetua Books, 1961. Closed tear to lower wrapper of Louis Armstrong volume, generally a bright set with the wrappers well preserved. Eleven volumes, 8vo. Each illustrated with black-and-white photographs throughout text. Original pictorial wrappers; preserved in the original publisher's shelfworn slipcase. A superb piece of 60s design, this boxed set of illustrated jazz biographies was originally published between 1959 and 1963. As Michael James writes in his volume on Miles Davis: "It is in the very nature of jazz that its essence cannot be caught on paper, and if it were not for the gramophone record the appeal of the music, though initially just as strong, would be far less widespread... For collector and critic alike, however, records have drawbacks other than the obvious ones. Prominent among these is the ease with which they allow the listener to imagine the music existing in a void, detached from the manifold forces, interior and exterior, which went into its making." This series attempted to fill that void, offering historical and musical background on eleven jazz masters, complete with discographies. The set includes Albert McCarthy on Louis Armstrong, Burnett James on Bix Beiderbecke, Max Harrison on Charlie Parker, Charles Fox on Fats Waller, Michael James on Miles Davis and Dizzy Gillespie, G.E. Lambert on Johnny Dodds and Duke Ellington, and Martin Williams on Jelly Roll Morton and King Oliver. Paul Oliver also contributes a volume on Bessie Smith, the lone queen among the kings. A near-fine set, in the original publisher's slipcase. (Inventory #: 406170)
$375.00 add to cart Available from Riverrun Books
Share this item

The Bridge. A Poem

New York : The Limited Editions Club , 1981
(click for more details about The Bridge. A Poem)
View all from this seller>