The Regius Chair of Military Surgery in the University of Edinburgh, 1806-1855. 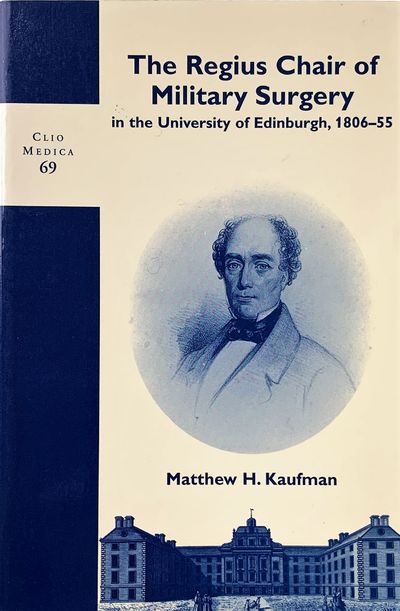 by KAUFMAN, Matthew H. (1942-2013).
New York:: Rodopi, 2003., 2003. Series: Clio Medica 69. 8vo. [vi], 361, [1] pp. Figs., index. Pictorial wrappers. Fine copy. ISBN: 904201248x "The significance of the Regius Chair of Military Surgery that existed in the University of Edinburgh from 1806–55 is discussed in detail for the first time in this book. The first holder, John Thomson, also held the Royal College of Surgeons of Edinburgh's Chair of Surgery from 1804. This Regius Chair was the only one of its type in Britain for almost 50 years, and was established during the Peninsular War. After the second holder, Sir George Ballingall, died in 1855, the Government withdrew its funding support. This Chair introduced numerous Edinburgh medical students to Military Surgery, and many who attended subsequently entered the Medical Service of either the Army, Navy or East India Company. Large numbers of medical officers in the Public service also attended. These courses were popular, and the topics covered were not discussed elsewhere in the Edinburgh medical curriculum." – Brill Press. (Inventory #: PW1408)
$50.00 add to cart Available from
Jeff Weber Rare Books
Share this item

Hints on Shooting and Fishing, &c. Both on sea and land....