James King R. N. Captain Cook is killed but The Third Voyage of Discovery goes on. 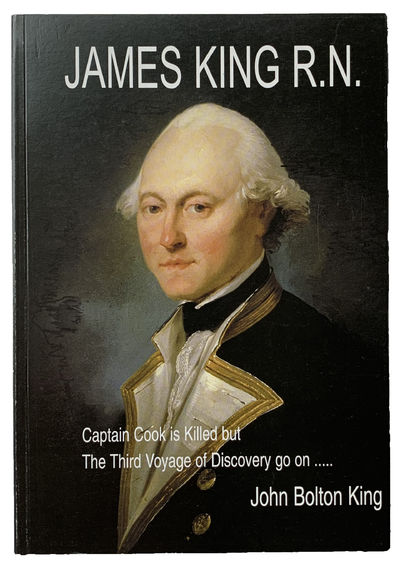 by [KING, James (1750-1784)] KING, John Bolton.
Exeter:: South West Maritime History Society, 2004., 2004. Series: Maritime monograph, no. 4. 8vo. [x], 209, [1] pp. Pictorial wrappers. Very good. ISBN: 095264553x "Not another book about James Cook or Joseph Banks, nor even the often neglected Charles Clerke, but one about James King who is usually remembered as the man in command of the Discovery after the death of Captain Clerke in August 1779. He went on to become one of the authors of the official account of the Third Voyage, covering the last part of the voyage from just before Cook's death. / King had not sailed with Cook before joining as second lieutenant on the Resolution in February 1776. He came with both a scientific as well as naval background, having studies mathematics in Paris and astronomy at Oxford. He was engaged, along with Cook, by the Board of Longitude to "make all the necessary Astronomical and Nautical Observations that should accrue", as Cook recorded in his journal on 11th June 1776. / The book starts with the ships' arrival at Hawaii, rather than the birth and childhood of James King, which do not appear until chapter 22! Here we learn that "He had been born in Clitheroe in 1750, one of the eight children of Dean King, the Vicar of that place, and his wife Anne… James' early education had been at Clitheroe Grammar School. At the age of twelve he had entered the Royal Navy and served, in turn, under Lord Rodney, Sir Hugh Palliser and Earl St. Vincent. As a midshipman, he was under Palliser on the Newfoundland Station at the time Lieutenant James Cook, eleven years his senior, was serving there as Marine Surveyor". / It is surprising there is no information about the ships he served on, nor about Rodney, Palliser and Vincent. These names may not be well known to the general reader that the book is aimed at. However, when King mentions other officers and crew in his journals, Bolton King always explains their role and something of their past and future lives. / Bolton King has an easy going style that is pleasant to read, though occasionally there is some stiffness. Considering the large amount that King wrote in his journal it is good to see that Bolton King has not quoted from him in great swathes. Rather, the quotes are selective and pertinent. Instead we get a description of what occurred based on the official account of the voyage and King's own manuscript journals. I would have liked to have known which passages came from the official account and which from his manuscript journals, as the latter would have been rawer and fresh, as they were written on the spot whereas the former were the words polished for the public. / On occasions Bolton King compares a scene with the modern day. For example, when the ships approached Macau, he writes "Taipa is now connected to the mainland by a one and a half mile 132.long bridge. However, Resolution and Discovery were eventually directed to an anchorage in the Macao Road, a position which was to the east of a second bridge, built in 1992-3." And a few pages later "Now, at the beginning of the 21st century, Macau is completely over-shadowed as a trading post by its near neighbour Hong Kong. Two hundred years ago it was Macau that was the centre of international commerce for the south east Asian coast." These are valuable additions. / By studying King's handwriting Bolton King makes some interesting conclusions about King's health. When the ships leave Macau he writes "Judging by the odd remark and changes in his handwriting, King was not now in the best of health. One might conjecture that he was already beginning to suffer from the disease, which would eventually kill him." At Simonstown Bay, South Africa, Bolton King remarks "He, himself, must have been feeling better, as the writing in his manuscript journal was much tidier than it had become in south east Asian waters." / There are minor errors, such as Resolution and Discovery being described as "converted Whitby barques". The Endeavour was a bark, but these two ships were not; Cook used the word sloop. / The book includes over 20 illustrations from the official account of the voyage, plus a few others, such as "A page from James King's Working Journal for January 29th to February 6th 1780 detailing their arrival at Pula Condore". One curious addition is the "line drawings of the Earl of Pembroke later HMS Endeavour". The Endeavour is nice to see but of a different shape to the ships sailed by King. / Bolton King describes King's life after the ships returned to Britain, including a remarkable feat of navigation while escorting a very large convoy of 500 merchantmen to the West Indies. Bolton King's personal insight to the man and his family is shown clearly in the remark "It has been said by succeeding generations of the King family, that, overnight, James' hair turned from brown to grey." / The story ends with a tribute: "During his short life James King had amply proved his abilities as a seaman, nautical tactician, astronomer and geographer; all with an unpretentious bearing of authority. This was a man of whom many said in one way or another that they had been glad to be his friend, and that his firmness, coupled with a natural politeness, brought great advantages, other than the skills for which he had been engaged, to the expedition and many times saved bloodshed, when Cook and some other officers with quick tempers might have acted too hastily."" –Captain Cook Society. (Inventory #: PW1415)
$10.00 add to cart Available from
Jeff Weber Rare Books
Share this item

Birmingham, AL: : University of Alabama Press, 1968, 1994. , 1968
(click for more details about Rare Books and Collections of the Reynolds Historical Library. A Bibliography.)
View all from this seller>