Confederate Emancipation: Southern Plans to Free and Arm Slaves During the Civil War 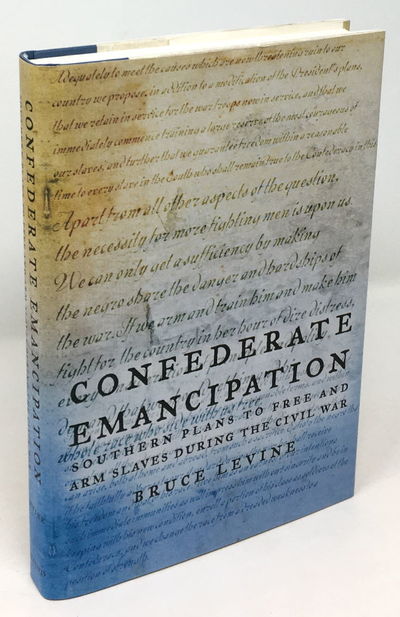 by Levine, Bruce
Levine, Bruce. Confederate Emancipation: Southern Plans to Free and Arm Slaves During the Civil War. Oxford/New York: Oxford University Press, 2006, first edition. Hardcover with dust jacket, oatmeal paper over blue cloth spine with gilt spine titles, 15.5 by 24 cm, viii 252 pp., illus. Near fine, unread copy. From the publisher: "In early 1864, as the Confederate Army of Tennessee licked its wounds after being routed at the Battle of Chattanooga, Major-General Patrick Cleburne (the 'Stonewall of the West') proposed that "the most courageous of our slaves" be trained as soldiers and that "every slave in the South who shall remain true to the Confederacy in this war" be freed. In Confederate Emancipation, Bruce Levine looks closely at such Confederate plans to arm and free slaves. He shows that within a year of Cleburne's proposal, which was initially rejected out of hand, Jefferson Davis, Judah P. Benjamin, and Robert E. Lee had all reached the same conclusions. At that point, the idea was debated widely in newspapers and drawing rooms across the South, as more and more slaves fled to Union lines and fought in the ranks of the Union army. Eventually, the soldiers of Lee's army voted on the proposal, and the Confederate government actually enacted a version of it in March. The Army issued the necessary orders just two weeks before Appomattox, too late to affect the course of the war. Throughout the book, Levine captures the voices of blacks and whites, wealthy planters and poor farmers, soldiers and officers, and newspaper editors and politicians from all across the South. In the process, he sheds light on such hot-button topics as what the Confederacy was fighting for, whether black southerners were willing to fight in large numbers in defense of the South, and what this episode foretold about life and politics in the post-war South. Confederate Emancipation offers an engaging and illuminating account of a fascinating and politically charged idea, setting it firmly and vividly in the context of the Civil War and the part played in it by the issue of slavery and the actions of the slaves themselves." (Inventory #: 3512)
$15.00 add to cart Available from Bay Leaf Books
Share this item