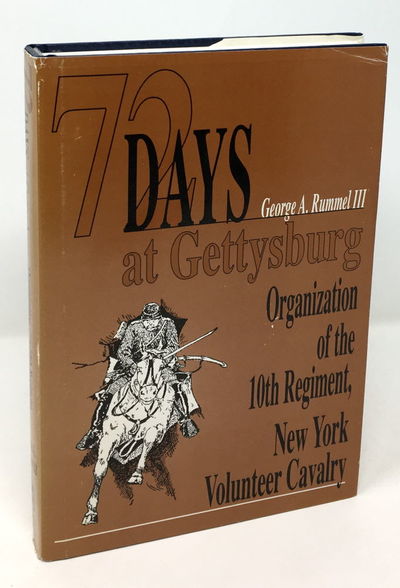 by Rummel III, George A.
Hardcover with dust jacket, blue cloth with gilt spine titles, 16 by 23.5 cm, ix 254 pp., illus. The hardcover itself is near fine; the dust jacket is good with light rubbing and edge wear, a few small tears, and fading on the spine panel. From the front flap: "Long before Robert E. Lee or George Gordon Meade ever thought of fighting in Gettysburg, the Union's War Department had already recognized that town and its surrounding countryside as a good location for the training and stationing of its forces. Both that geography and the citizens there were important in the preparation of the newly recruited 10th Regiment, New York Volunteer Cavalry, 'The Porter Guards,' for its later role in the Civil War. Establishing their winter quarters in Gettysburg, the New Yorkers both trained near the town and interacted with its residents. The War Department in Gettysburg met its goals. First, it there trained and equipped its new horsemen. Secondly, located close to the Virginia Battlefield, the camp offered a sense of comfort and protection to the local citizens. But proving that armies follow roads, the war was to return to Gettysburg in its full fury two years later." (Inventory #: 3514)
$15.00 add to cart Available from Bay Leaf Books
Share this item