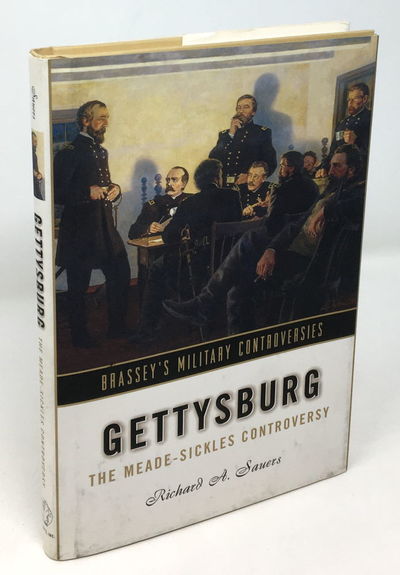 by Sauers, Richard A.
Sauers, Richard A. Gettysburg: The Meade-Sickles Controversy [Brassey's Military Controversies Series]. Washington DC: Brassey's, Inc., 2003, first edition. Hardcover with dust jacket, cream paper over boards with silver spine titles, 15.5 by 23.3 cm, xii 206 pp., illus. The hardcover is a near fine, unread copy; the jacket is very good with some rubbing on the front and rear panel. From the publisher: "On July 2, 1863, the second day of fighting at Gettysburg, Maj. Gen. Daniel E. Sickles, in a controversial interpretation of his orders, advanced his men beyond the established Union line, exposing his flanks to a potentially devastating Confederate attack. Shortly after being reprimanded by his commander, Maj. Gen. George G. Meade, for endangering the entire Union Army, Sickles was hit by a cannonball. He returned to Washington, D.C., with his leg amputated and his pride badly wounded. A politician and lawyer prior to the war, Sickles was already notorious for being the first person in U.S. history acquitted of murder by pleading temporary insanity. During his recuperation in the nation's capital, Sickles defended his actions at Gettysburg to anyone who would listen, including President Lincoln, and criticized Meade before the Congressional Committee on the Conduct of the War. He continued defending himself for years after the war, while Meade remained mostly silent. Historian Richard A. Sauers destroys many commonly held myths about the controversy by examining the evidence in detail. In this fascinating analysis, he highlights the way combat is always complicated by personality conflicts and human frailties among military leaders. He also demonstrates that distortions, like Sickles's version of Gettysburg, are frequently accepted as fact by historians and repeated for generations to come. Sauers shows that Sickles's unjust manipulations harmed Meade's reputation for years after the war." (Inventory #: 3515)
$15.00 add to cart Available from Bay Leaf Books
Share this item