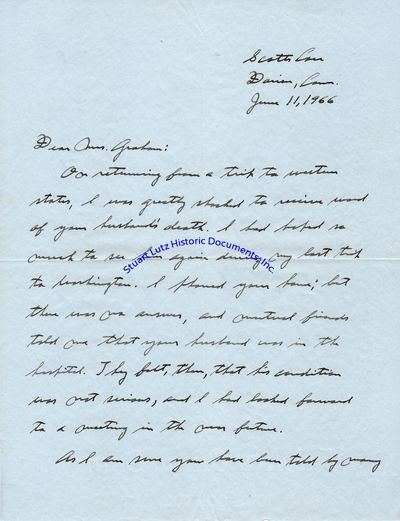 signed
by CHARLES LINDBERGH
CHARLES A. LINDBERGH (1902-1974). Lindbergh was a famous American aviator best known for making the world’s first solo non-stop transatlantic flight. ALS. 2pgs. Darien, Connecticut. June 11, 1966. An autograph letter signed “Charles A. Lindbergh”. Lindbergh wrote to Mrs. Edward H. Graham, wife of ecologist and conservationist Dr. Edward H. Graham, sending his condolences on Dr. Graham’s recent passing: “Dear Mrs. Graham: On returning from a trip to western states, I was greatly shocked to receive word of your husband’s death. I had hoped so much to see him again during my last trip to Washington. I phoned your home; but there was no answer, and mutual friends told me that your husband was in the hospital. They felt, then, that his condition was not serious, and I had looked forward to a meeting in the near future. As I am sure you have been told by many others, in addition to the personal loss to his friends, your husband’s death will be felt in fields of conservation all over the world, for he has contributed so much to conservation activities in the past and he would have contributed so much more in the future. I send with this letter my deep sympathy. Charles A. Lindbergh”. The letter is very good condition and includes the original mailing envelope. (Inventory #: 4862)
$500.00 add to cart Available from
Stuart Lutz, Historic Documents, Inc.
Share this item

A Navy Corpsman Writes From Iwo Jima: “Getting Fired At By A Machine Gun And Having A Couple Of Sniper’s Bullets Come Whizzing By…They Will Wipe Out All Organized Resistance Soon”


(click for more details about A Navy Corpsman Writes From Iwo Jima: “Getting Fired At By A Machine Gun And Having A Couple Of Sniper’s Bullets Come Whizzing By…They Will Wipe Out All Organized Resistance Soon”)
View all from this seller>