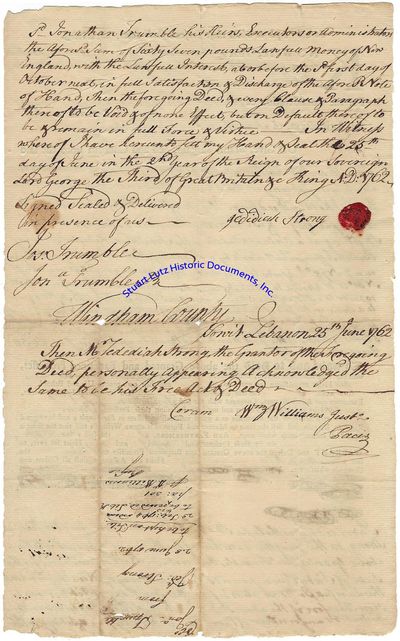 signed
by WILLIAM WILLIAMS
WILLIAM WILLIAMS (1731-1811). Williams was a Signer of the Declaration of Independence from Connecticut. He served in the Continental Congress from 1776 to 1778, and again from 1783 to 1784. He later helped frame the Articles of Confederation and was a member of the Connecticut convention that ratified the Constitution. JONATHAN TRUMBULL, JR. (1740-1809). Jonathan Trumbull was son of the only Revolutionary War Governor to side with the patriots. He served in the State Legislature, the Continental Army and Comptroller of the Treasury. He was also aide-de-camp to George Washington in 1781, and served in the first three Congresses and becoming Speaker. He was Governor of Connecticut for eleven straight terms. JOSEPH TRUMBULL (1737-1778). Trumbull was the Continental Army’s first commissary general. ADS. 2pg. 12” x 7 ½”. June 25, 1762. Lebanon, Connecticut. A partly printed document signed “Wm Williams”, “Jona Trumble Jr” and “Jos Trumble”. Williams completely handwrote the portion above his name: “Windham County To wit Lebanon 25th June 1762 Then Mr. Jedediah Strong, the Grantor of the Foregoing Deed, personally appearing Acknowledged the Same to be his Free Act & Deed Wm Williams Justo”; Williams was a Justice of the Peace. The deed is witnessed by Joseph Trumbull and Jonathan Trumbull, Jr., as well as Jedediah Strong. The deed is for property in Lebanon being conveyed by Jedediah Strong to the later Governor Jonathan “Trumble.” That was “Brother Jonathan’s” name until he changed it for his entire family to “Trumbull” in 1766; the original spelling is unusual. The deed has a description of the property being transferred. It has a red wax seal by the Strong autograph and professional repairs to the central fold. (Inventory #: 4858)
$950.00 add to cart Available from
Stuart Lutz, Historic Documents, Inc.
Share this item